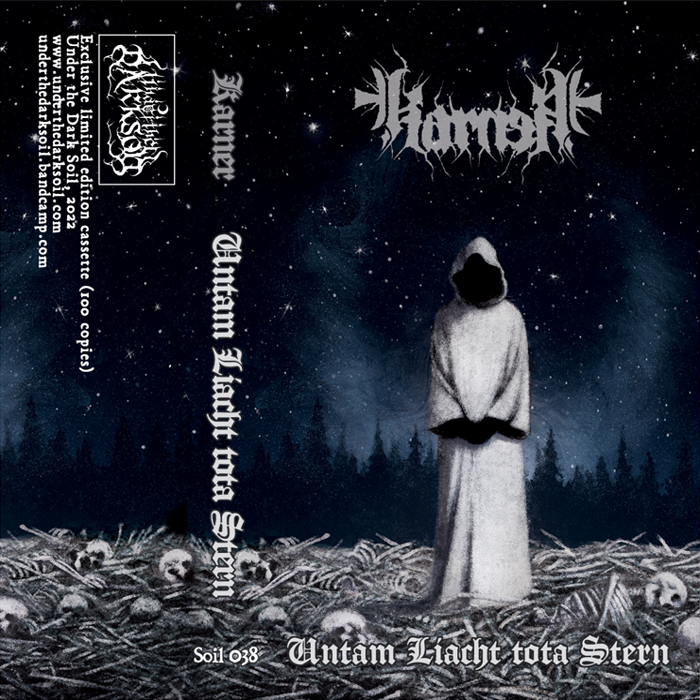 Hailing from Villach in Austria, Black/Death Metal quartet Karner take their inspiration from both nature and the moral and societal decline of mankind. ‘Untam Liacht Tota Stern’ is the bands debut full length album and has been released on CD and LP via Dominance of Darkness Records, and on cassette by Under the Dark Soil.

Opening track ‘Wöltnzastöra’ features a short, brooding introduction before churning out a punishing display of epilepsy inducing staccato drum tones, viciously barked vocal work, thunderous rumbling bass play and Baltic feeling riffs that in places tunnel downwards into some fervent oppressive melodies. In terms of the production there is a slight murkiness to the overall sound but this stops short of the album getting mired in unfathomable gloom.

As hostile and merciless as Karner can sound, they also know how and when to let loose with far more liquid, catchy rhythms whilst still fully maintaining their bite in the riffs and vocals as well as never losing their abrasive edge in the backline. As well as that they also excel at grinding out furious atmospherics through concentrated guitar leads that stand out from their usual short shrift cutting sound. Listen to ‘Zur Oltn Loh’n’ in particular for a classic example of Karner’s ferocious nature meeting their more inventive side.

If you are thinking at this point that there is no way that this album can up another notch, Karner have the answer. Taking the pace down to a Funeral Doom style crawl, the malevolence and sheer brooding melancholy that collide to create the twelve minute epic that is ‘Ibarn Hoascht’ are truly breathe taking. Here the vocal work takes on a far more anguished and ravenous tone, whilst atmospheric undertones rise up and soar, bleeding their misanthropic bile into the ether. Its also impressive how the drumming style that was so fast and in your face can also be just as powerful when used sparingly and subtlety as they are here, although they are given room to explode in a tidal wave of carnage and brutality as the track progresses. In stark contrast to this, when Karner break the flow with a bleak sounding melodic interlude, you can almost taste the lamentation pouring from your speakers.

Karner are a band who can produce spellbinding heaviness and mesmeric harmonies at any pace and all sound incredibly dark, ferocious and at the same time disturbingly atmospheric and chilling. This album impacts me on a personal level. (Hell, the bass solo in ‘Totntonz’ was so sexy it made my balls tingle) Its an every evolving, hyper-intensive slab of blackened nihilism, bleak, mournful, powerful and vicious all at once. (Marksson)

Under the Dark Soil