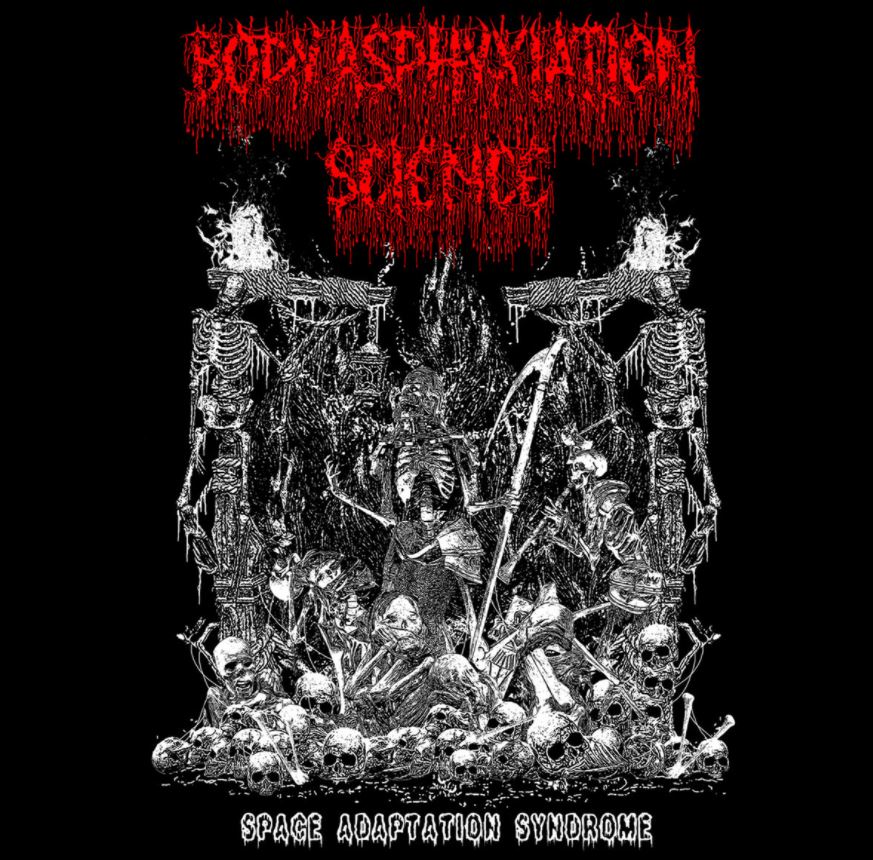 Here, we have another 2021 demo to present, this one titled “Space Adaptation Syndrome” by UK duo Body Asphyxiation Science. Offering a trio of pieces lasting under ten minutes; contains members Jason Baker, vocalist & also responsible for mixing/mastering this release and Joss Allen, who plays guitar, bass, & does the drum programming.

Between these two talents, they generate a polished mix of condensed primitive riffs blending portions of celestial breakdowns, giving sentiment of listener experiencing actual suffocation in the neverending cosmos. Aside from VHS’s “Gore From Beyond The Stars” & Afterbirth’s “Four Dimensional Flesh”, not many releases that tap into cosmonaut themes.

Cover art by Arketipe, fine attributes with a pile of skull and bone fragments, symmetrical hanging skeletons on both sides, centered with interpretation of grim reaper visibly showing true form as opposed to under a cloak with his scythe in grasp.

Opens with “Transcending To The Outer Reaches Of The Crushing Black”, immediate crisp staccato from percussion that stuns, followed by reverberated hoarse gutturals, giving impression this was recorded in a colossal abyss. Admire the riffs being simplistic yet with enough verve to recognize the adaptability Allen displays with technical riffs & whisper of melody during the descending tempos. No frills, just straight forward savagery with their compositions.

Second & personal favorite, “Planetary Cemetery Funeral Urn”, though it’s the shortest featured, leaves a positive impact. As with previous, starts fast paced, bludgeoning your earlobes until an abrupt shift occurs between 0:51-1:33, momentary melodious pause of trancelike lucidity, before chiming into succulent breakdown & ends on precipitous note. Ceasing with title track, more of those spacey effects around ⅔ in for a nice touch, surrounded by those crushing riffs and that punishing vocal cadence.

Looking to drift away from your shitty reality? highly recommend! (Tori Belle)