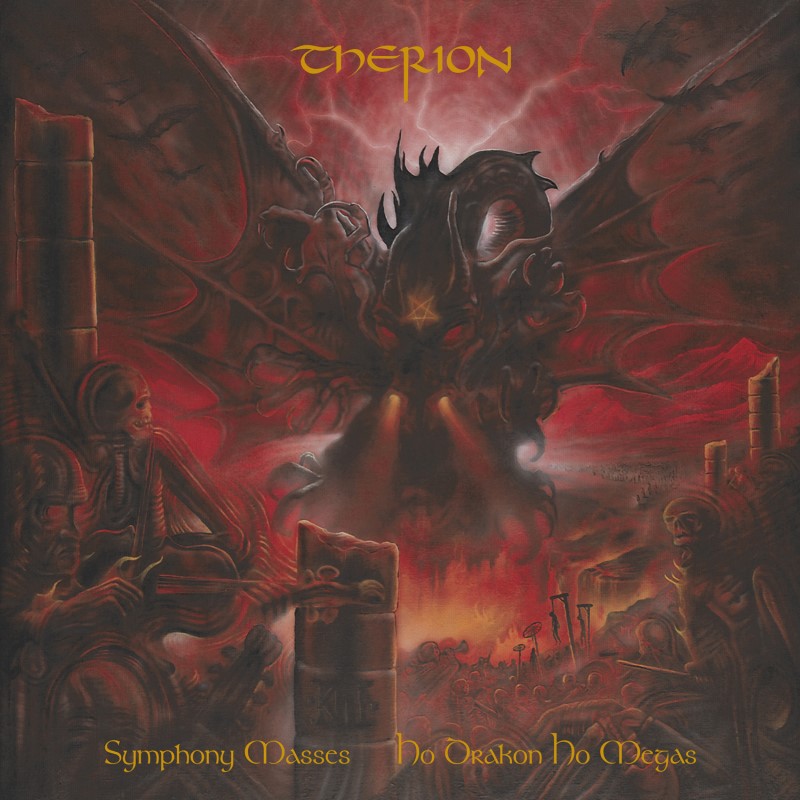 With the bands’ 1992 album, ‘Beyond Sanctorum’, Therion proved not quite to be a band to play Death Metal-by-numbers. On the contrary. They already pushed the boundaries of the genre and were far more creative than most of their peers. Yet, the journey to discover their own musical identity was far from over. We do now know that they would grow into a symphonic colossus, but on ‘Symphony Masses: Ho Drakon Ho Megas’ Therion shifted their sound to even more creative waters and started to shake off its Death Metal roots even more.

On this third album Therion started to incorporate more melodic, heavy metal-based song structures and the first gothic/symphonic elements are started to creep in. And so it goes from the rather thrashy ‘The Eye Of Eclipse’ with its fast blast beats (though it also already has a ‘Theli’-like atmosphere) to the rather doomy ‘Dark Princess Naamah’ and the pompous ritualistic ‘Ho Drakon Ho Megas’. There’s an even more prominent role for the keyboards as well as for the various sound effects/samples, classical and Arabic/Persian elements. On the debut album, ‘Of Darkness…’, and more prominently on later albums, Christofer Johnsson proves himself to be an excellent songwriter, it does not quite work that well on ‘Symphony…’. There is a complete lack of coherence and, frankly, on this record Therion sound more schizophrenic than ever. Johnsson on his part once said that ‘Symphony…’ is Therion’s most experimental record. Yes. Or maybe it is more like a band adrift, looking for the right musical direction. However, this hodgepodge makes it not quite an easy listen and honestly, Johnsson’s vocal abilities are limited doesn’t make it better either.

It is not only the musical direction of ‘Symphony…’ that makes this record an important one in Therion’s extensive discography, but it also marks a shift in lyrical themes. The more standard environmental topics and H.P. Lovecraft-inspired themes made room for occult and esoteric concepts. The band had Swedish occultist, left hand path-magician and publicist Thomas Karlsson as inspirator and (co-) writer for a number of lyrics on this album, which he remained doing so for the following seventeen years.

Though ‘Symphony…’ is not the easiest album to wrap your head around and it is not quite the most essential in Therion’s back catalogue and not all of it withstood the test of time all too well, it is an album of great importance in the development of what Therion became in the few years after its release. Where ‘Beyond Sanctorum’ left the band on the threshold of a new era, ‘Symphony…’ led the band past that threshold.