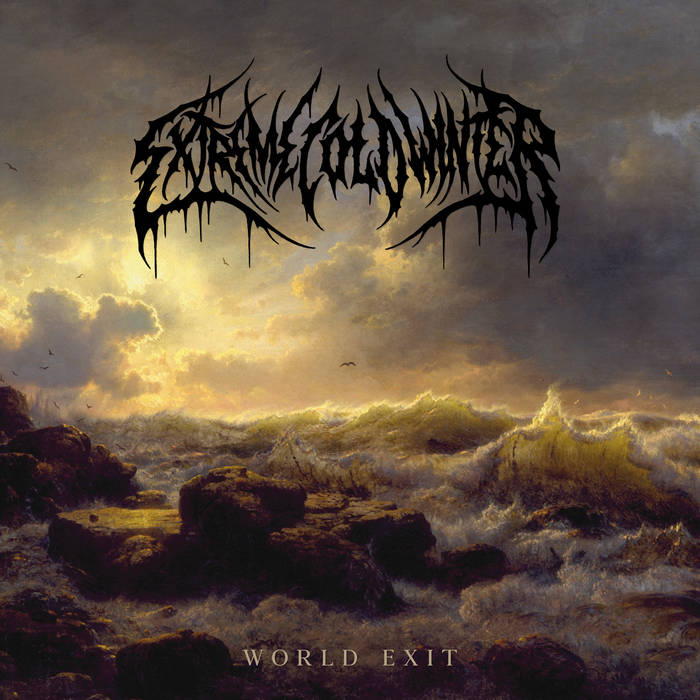 Dutch trio Seth van de Loo, A.J. van Drenth and Pim Blankenstein formed Death/Doom Metal band Extreme Cold Winter back in 2009, and to this day the band retains its original members, something of a rarity. Despite the length of the bands tenure they have been very sparse with their releases; in fact on 2015’s ‘Paradise Ends Here’ EP was their only offering until this, a 2021 debut album entitled ‘World Exit’. The fact that Hammerheart Records put this out on both CD and LP would suggest that there was a certain level of anticipation to hear what this deathly Dutch trio would produce.

It was a sense of anticipation that was well founded. Extreme Cold Winter perform to a very methodical standard; their guitar work and drumming style especially are very regimented. With a vocal style that is rigid, powerful and deeply growled, and a touch of atmospheric synth undertone introduced in places, ECW (Not the defunct wrestling promotion of course) revel in their deliberate and moving sound, and a comparison to Death/Doom legends Paradise Lost cannot go unnoticed.

I’m drawn to the lyrical concepts held within this album; opening track ‘Animals in Wintertime’ giving a great insight into the hibernation process and surviving the harsh climatic conditions of winter is certainly not your usual Death Metal fodder. There is no cohesive them either, as outer space, trying to dig your way out of an avalanche and Biblical medicinal practices amongst other subjects all get time to be aired. A very eclectic bunch of themes I’m sure you’ll agree.

As ‘World Exit’ progresses it does start to feel a little draggy. Extreme Cold Winter never pick up their pace, and whilst some chugging riffs and harmonic background synth do break up the monotony a little, it is still hard to escape the fact that no matter how well performed these tracks are, they are starting to sound the same. All in al ‘World Exit’ is a wonderfully rendered album with stunning artwork and precision musicianship, but by the end of the opus time has moved into slow motion.