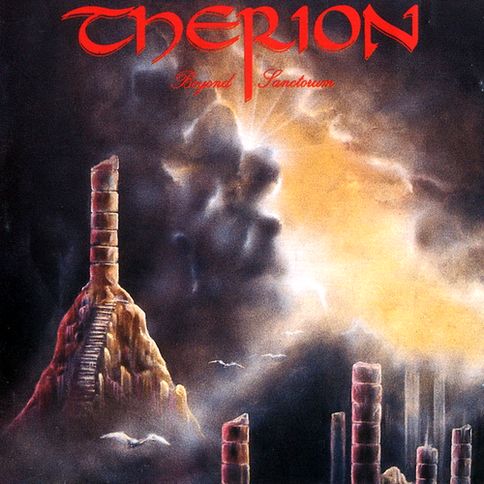 The second part of Hammerheart Records’ Therion reissues, after the great ‘Time Shall Tell’ 12” EP, is the bands’ second album ‘Beyond Sanctorum’. Indeed, skipping their great debut LP ‘Of Darkness…’ (1991). ‘Of Darkness…’ was already repressed on vinyl in 2012 by Nuclear Blast (with minimalistic and total hideous artwork) and five years later on both vinyl and CD by Peaceville Records, this time with original artwork. Well deserved reissues nonetheless, as ‘Of Darkness…’ is one of the best Swedish Death Metal records of all time. But in contrary to that iconic debut album, ‘Beyond Sanctorum’ never got repressed on vinyl at all and the CD versions had the same aforementioned tasteless artwork. So, this is the first proper presentation of a somewhat forgotten album.

The year is 1991, December to be exact. The year in which Therion visits the Montezuma Studios (Candlemass, Edge Of Sanity, Hexenhaus) to record the follow up to their debut album. With the choice for this particular studio, they went against the grain. Again. On their debut they went for a sound that was much unlike the punk-based sound of Nihilist and now they chose not to record in the Sunlight Studios again – a studio that was used by almost every Swedish Death Metal band at the time. With this choice they take the first step in what will be a very adventurous musical career.

Unlike ‘Of Darkness…’, which is a trendsetting and pretty straight forward Death Metal classic, ‘Beyond Sanctorum’ is a more challenging listen. Within the boundaries of extreme metal, the band is gently starting to let their creativity run free. This leads to a mishmash of styles, opener ‘Future Consciousness’ is rather thrashy but at the same time ‘Symphony Of The Dead’ sounds pretty much as early Anathema or The Gathering. It has traditional grunts and growls but cleaner operatic vocals (both male and female) make their appearance, so does the first Mediterranean influences and further use of keyboards. This wild goose chase results in a lack of coherence within the tracks, but on the other hand is fits within its timeframe in which more bands started to widen their visions. Bands like Edge Of Sanity and Pan.Thy.Monium for instance also started to stray away from their respective Swedish Death Metal roots, it has to be said though, that most of these bands involved the ever-prolific Dan Swanö, who definitely has a free and creative mind. Not only within the Swedish borders Death Metal bands began exploring different musical territories, bands like Morgoth, Dark Millennium, Amorphis, Gorefest, Sentenced Pyogenesis, Disgrace or even Carcass went through a complete metamorphosis and were hardly recognizable compared to their earlier recordings. And not even only the Death Metal scene, but metal as genre, started to flourish in different musical directions. With ‘Beyond Sanctorum’ Therion found itself on the threshold to a new world, with new adventures and this album gives the first sneak-peak to what is yet to come.

To wrap it up, ‘Beyond Sanctorum’ is by no means a standard Death Metal album, as it incorporates many different influences and elements. Yet, it still has a lot to offer for the average Death Metal fan, though it might require a certain acquired taste or at least a little time investment, but it can, as Hammerheart aptly puts it, be a rewarding listen.