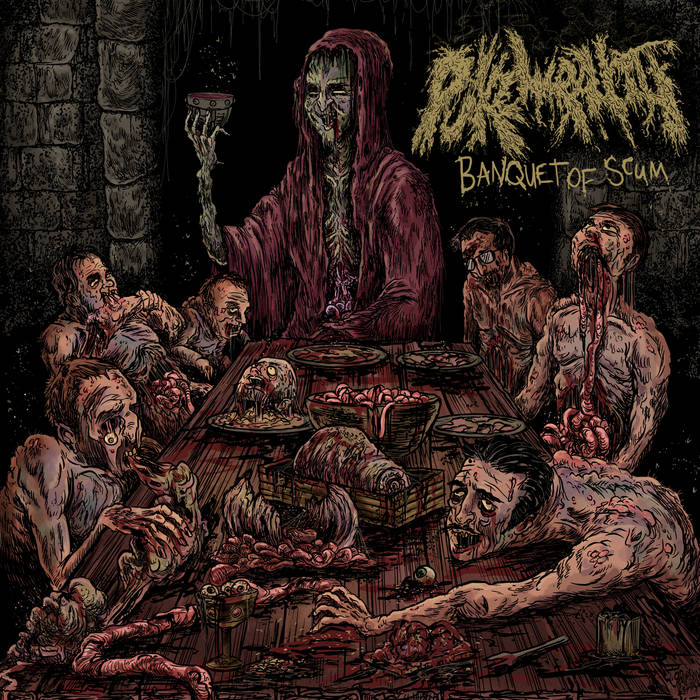 After last year’s debut EP ‘Returned Through Bile’ and the split tape with Intestinal Hex, Brendan Dean had to have felt ready for a debut album. So with ‘Banquet Of Scum’, he unleashes it on humanity.

Both the previously released EP and the songs from the split tape were unconvincing and involved little more than rather uninspiring, clinical and downright substandard Death Metal. Having listened to ‘Banquet Of Scum’ a few times, I can’t help but conclude that nothing has really changed. Although Dean is obviously doing his best to make everything look mean and dirty, just look at the artwork and song titles, it still simply comes across as digital and soulless. Chopping Death Metal riffs can be heard, but nowhere do they sound really convincingly sharp, aggressive or with enough depth. The overall sound is again very sterile and stripped of anything that could give the music any zest or soul. The songs are not dipped in any evil, dark, brutal or cavernous sounds, it is just bedroom PC-recorded Death Metal at its weakest. Compared to the earlier recordings, the programmed drums are of improved quality though, sounding slightly less digital, but especially on the up-tempo pieces still underwhelming. The same can be said about Dean’s vocals, they still sound ugly and forced. Something positive? That’s once again the guitar leads, which definitely stand out again compared to the rest of the performance. In fact, Pukewraith sounds like XXX ManiaK. And please keep in mind that XXX Maniak sounded like that on purpose… (FelixS)