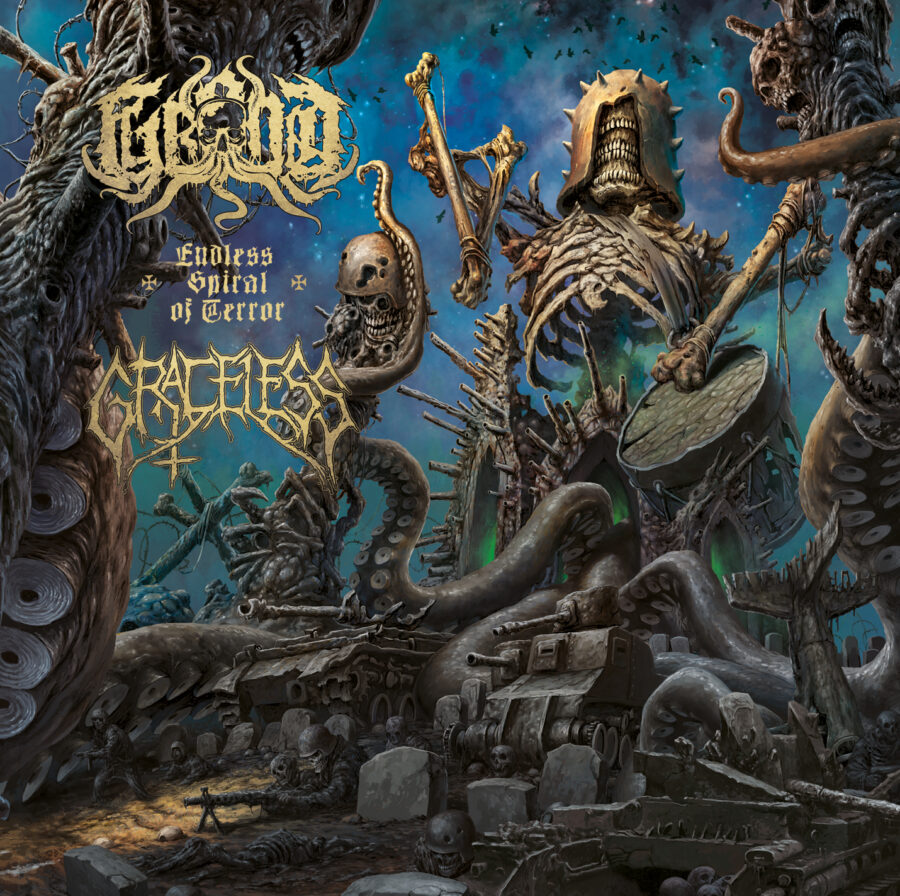 Russia and the Netherlands sent 2 armies in the name of Death Metal to crush skulls and blast bodies over the world. “Endless Spiral of Terror“ is the lovely title for this over 40 minutes battle between the raw and the morbid. Grond from Moscow deliver a morbid, rancid, yet clean (does this work together?) lovecraftian inspired Death Metal with eerie guitarworks, groove of a panzerbrigade and sea deep Cthulhu like vocals (reminds me of Unaussprechlichen Kulten) paired with shrieking twin vocals when needed to shatter glass. The songwriting is exellent and focuses on variation and heavy GROOVES. Nice melodic guitar solos give it more epicness on those parts. The overall sound is similar to Puteraeon, at least this band pops up when I listen to Grond. All rounded up well with a Cianide cover that sounds killer and crawls into your brain. Fat productions, killer songs, like this.

On the other side we got Dutch Doom/Death preachers Graceless (consisting of mostly ex-Nailgun Massacre members) from Leiden with their second release after their 2017 released album “Shadowlands“. The tuning seems quite similar in general like Grond, but Graceless got a more Swedish death touch with D-beats, crusty riffs and those Dutch Death Metal vibes we know from Asphyx, Grand Supreme Bloodcourt, Nailgun Massacre and the likes. The focus is clearly on headbanging stuff, means groove-oriented Death Metal, simple yet effective with no bullshit thrown in. Similar to Grond and also typical for Dutch death metal, they know how to incorporate melancholic melodies for the fallen brothers in arms (Hail Of Bullets another name I got to drop). The incorporation of clean guitars during the second song is perfectly placed before the doomhammer kicks in again. The second half of Graceless`s part is studded with Bolt Thrower like leads and rhythm sections which is heavy as fuck. You can`t than bang your head to this grooves (yes I like to use the word groove for this review a lot).

Raw Skull Rekordz did a good deal with this release, one of the most interesting splits I have listened to in 2019. Fans of Bolt Thrower, Puteraeon, Hail Of Bullets and the likes this is for you. Well done! (DPF)