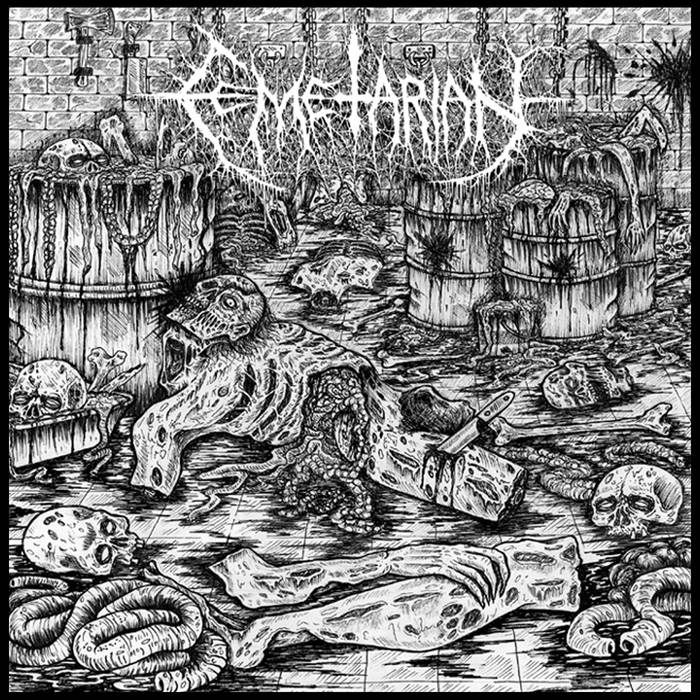 A diabolically repugnant gore drenched split CD / 7″ vinyl between two US Death Metal bands with a sound like tainted meat being force fed to a paraplegic. Texan group Cemetarian are purveyors of crawling, feral Death Metal from the abyss, a morass of sickeningly sluggish guitar leads drenched in darkness and pus and ripe with deathly, harrowing growls. Once the pace increases they sport a gurgling, filth laden sound completed by sickening drum tones and a punishing amount of bass lines. This split release is the bands only offering other than their debut demo ‘Tomb of Morbid Stench’, but they already play Death Metal just how I like it, with a sound like a persons innards being forcibly removed through their mouth!

Illinois quartet Absconder have a much more tenured career to date and the offal that they spew out is just as degraded and vile as Cemetarian. Their putrid offering of ‘The Lurker’ sounds like primordial filth biliously rising up through a swamp. Their brand of Death Metal has a sludge like tendency when played at a snails pace, and in quicker moments sounds akin to New York stalwarts Mortician. I can’t fault either band on this release, they both spew forth revolting doses of AIDS infested brutality, and I want to wallow in it! (Marksson)