Valkyrja – The Invocation of Demise 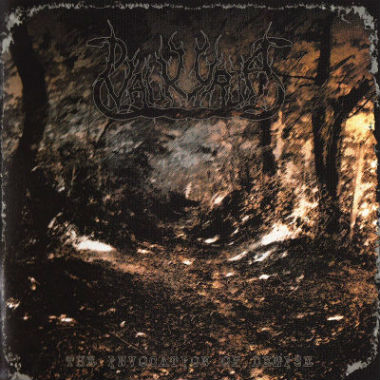 “The Invocation of Demise” is the debut full-length release from Swedes Valkyrja. A couple of the tracks started life on the two demos the band have released since they started out in 2004, but otherwise we are dealing with fresh material. Valkyrja play their black metal loud, chaotic and harsh in a style reminiscent of 1349 or Marduk, but excellent musicianship, a great tone and some innovative touches make this more interesting than your standard harsh BM workout.

It’s not much of a surprise to discover that this was recorded at Stockholm’s Necromorbus Studio, past haunt of fellow countrymen Watain and Funeral Mist. The buzzsaw guitars are given full rein, the bass lurks along with malign intent, the vocals are a shouted growl through clenched teeth, and the excellent drumming is nostalgically cavernous and deep- in short, it’s a fantastic sound for black metal that’s designed to be played with the volume pushed all the way up. If the snare starts to grate on your sensibilities after a while, well, that’s understandable, but you’re probably in the wrong game. The majestic, swirling energy and aggression of “As Everything Rupture”, the moody, menacing sprawl of “The Vigil” and moving, powerful, subtle melody underlying “Sinister Obsession” are all just different flavours of a fire-breathing, foot-stomping black metal maelstrom, and if you can’t take the battery, get out of Valkyrja’s crypt.

The ability to bring together all the layers listed above makes “The Invocation of Demise” accomplished, but one particular aspect makes it downright intriguing. Beginning on the solo of “The Vigil”, a distinctly warm, mournful guitar tone permeates this album, which actually evokes, ever so gently, the sad movements of Opeth, or perhaps some of the earlier British doom-death bands. The clean acoustic breaks that feature throughout are a standard of black metal, but when combined with this progressive streak they add up to create something quite beautiful and intricate- see the short instrumental “On Stillborn Wings”- without detracting from the relentlessly lethal and arrogant tone of the album.

In all, this is an accomplished and attention-grabbing debut, from a band I expect to see doing impressive things in the future, and will appeal to fans of noisy black metal and progressive extremity equally. (SKF)