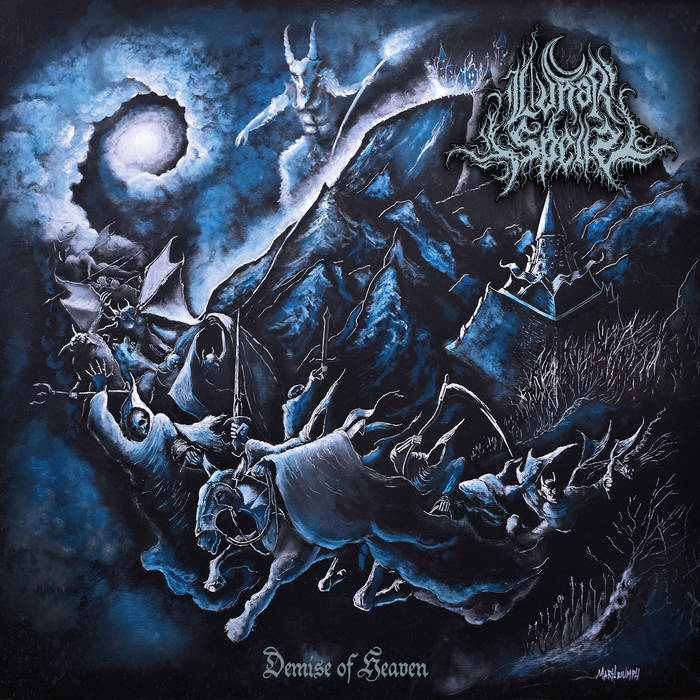 Anyone who follows the Black Metal scene a bit will have noticed that Melodic or Symphonic Black Metal is on the rise and is being widely embraced again, after years of being somewhat painted in a corner. This has spawned several good new bands, but also put old bands back on their pedestal and finally given some the credit they always deserved. The list of new bands now also includes this Greek Lunar Spells, formed in 2020, but with ‘Demise Of Heaven’ they are already releasing their two full-length album. But as with all genre flare-ups, not everything is worthwhile

The previous work (‘Where Silence Whispers’) was recorded with the then new vocalist Atxak, but apparently Lunar Spell has now been reduced to a trio again, which hasn’t stopped the band from adapting a smooth working pace. As on 2020’s first EP ‘Medieval Shadows From An Ancient Netherworld’, guitarist and keyboardist Cryptic has again taken charge of vocals. The slightly more raw Black Metal on the first EP had already moved more towards melodic or even symphonic Black Metal on the debut album, the band has continued that trend and on ‘Demise Of Heaven’ the band sounds downright bombastic. Of course, we already heard keyboards on the EP and it was definitely melodic as well as raw, but the emphasis has shifted much more towards bombast. So much so that it starts to work against them. ‘Demise Of Heaven’ now floats heavily on the keyboards, but they don’t have an organic sound and lose buoyancy. So not only are the keyboards a bit too thick on top now, the artificial sound detracts from the music’s atmosphere. The guitar work has a somewhat Finnish feel to it, but lacks the punch, sharpness and aggression that the Finns manage to bring to it. The production also lacks the atmosphere of better Finnish Black Metal, it just sounds soulless and bare.

Lunar Spells wasn’t much of a high-flyer at the time of their EP and debut album, but with ‘Demise Of Heaven’ they do not improve their position at all. Not only did the rawness of the EP’s sound suit the band better, but the addition of a far too thick layer of keyboards detracts from the songs, which in my opinion certainly have more in them than comes out now. For now, this is mediocre at best.