Ruin – Where Death Is Spread Out Across The Sky [EP] 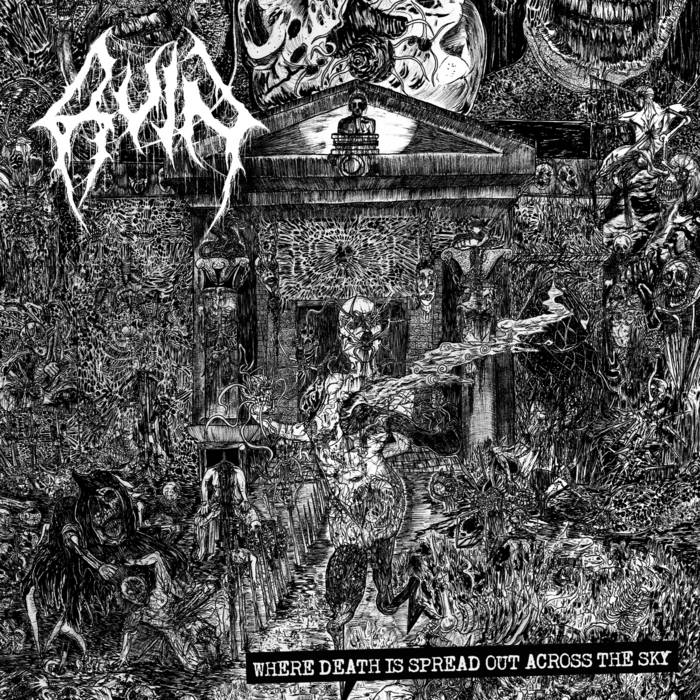 US Death Metal band Ruin trace their history back to 1991, and despite a short tenure originally, the band returned in 2015 though they only feature one original member these days, one Mihail Jason Satan. Since their return the band have been nothing other than prolific, with three full length albums, a handful of EP’s and compilations, and most of all a shit load of split releases to their name. Last year saw a new EP release, ‘Where Death Is Spread Out Across The Sky’ which was unleashed on cassette by New York Death Metal label Frozen Screams Imprint.

You know that sinking feeling you get when you know in your heart that something is about to go wrong? That is how ‘Where Death Is Spread Out Across The Sky’ starts! Ruin create a slow, predatory sound through crawling, murky riffs mixed with a monolithic drumming style and vocals from the very depths of the abyss, and all cocooned nicely into a ball of reverb and bass groove! Only when Ruin finally open the taps and let their horrific brutality wash over you does the oppressive atmosphere lift slightly, only to be replaced but a frenzied duel attack of marauding drumming and savage guitar leads, before once more delving down into a bleak pit of despair, madness and thundering bass rumble!

Some momentum is lost by the lengthy introduction to ‘Dragging A Dead Corpse Up to Hell’ which adds nothing to the EP, though the band do well to drag back their impetus with a crushing bout of rampaging riff with an ominous sounding undertone. I’m not against samples and intros into tracks as long as they add to the overall theme, but Ruin don’t learn their lesson from the previous track as ‘Abuse of the Lord’ features another arduous throw away intro before finally breaking out into some cloying, slowed down grooves before once more exploding into volatile and aggressive brutality, though by this stage the stop start nature of the release has sapped a lot of the EP’s power. And its repeat ad nauseum as the second half progresses through the same turgid repertoire of low key intro sections that are meant to be harrowing but are just dull.

‘Where Death Is Spread Out Across The Sky’ started out really promising, but there is so much filler on this EP that I hope this isn’t a sign of the direction the band is now taking.