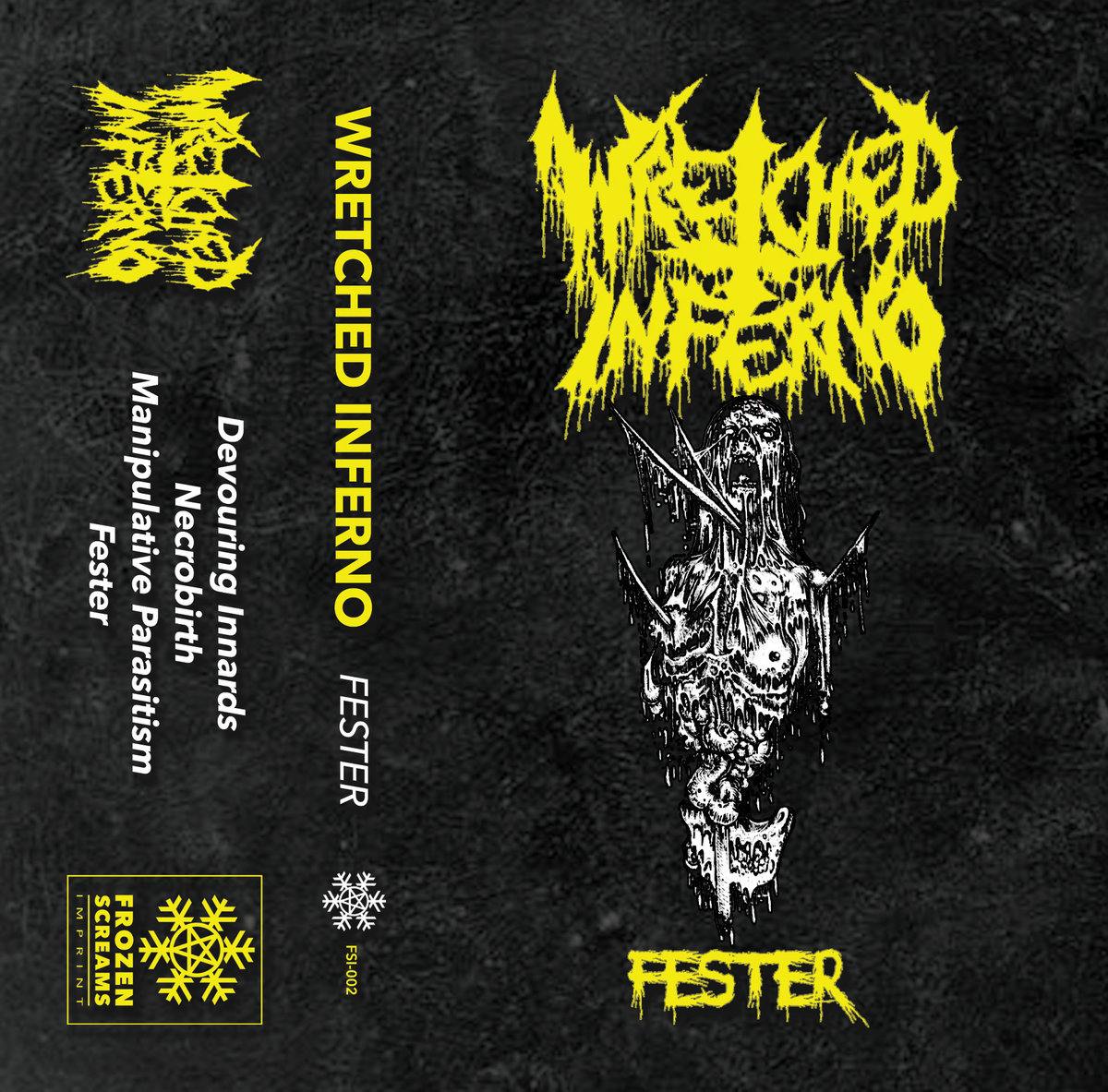 Ah. After having to review some absolute sloppy rubbish, it is always a pleasure to listen to something that sets the mind at ease with its excellent delivery and just sheer goodness. Wretched Inferno hail from a place I as an Aussie find very hard to pronounce. Massachusetts, and I’m also sure that they would struggle to say some of our place names like Puckapunyal and Indooroopilly, but that is not what we are here to discuss now is it. What we ARE here to discuss is their EP release “Fester.” You cool with that? Excellent.

Sooo. Four tracks, and we start with a monstrous belching on “Devouring Innards.” The band use a variety of vocal attacks ranging from giant mutated toad through to screaming goblin, and the riffs man, the riffs are as sick as a diseased person who has some sort of horrible, for lack of a better word, disease. Fatter than Elvis just before he died in all truth. MId paced stuff, accelerating at times, and the kind of shit that just keeps on punching away at you until you drop from sheer exhaustion. Fucking great stuff.

Second track “Necrobirth,” is pure Death Metal bliss. The riffs again piling up like bodies in a morgue after some sort of infectious outbreak, covered in blisters and rotting away with pustulent ooze leaking from every orifice until they are put on ice. Festering one may even say before they are attended to. Yes, this is the shit, and I am loving it. Please crush me with some more.

And they do. Track the third, “Manipulative Parasitism” worms its way under your skin in quite the convincing way. If I say riffs one more time you will probably kill me so I will comment on the excellent drum performance instead, delivered with razor sharp precision, complementing the whole thing to perfection, and did I mention the thunderous undercurrent laid down by the bass? Well, I just did now. These lads are very serious about their Death Metal, and it shows in spades.

Final track (and title track) “Fester,” is pretty much as perfect as all that go before it, and maybe one poofteenth (slightly longer than a millimetre and less than an ounce) better. A long way of saying that it is my favourite. This fucker just drips with aggression, hate, and all the nasty things we love about our chosen Genre, and the RIFFS (yep, said it again, cop that) in the slower parts actually nearly (and I do say nearly because if they had I would have to file an insurance claim and that is a real pain in the rear end) put a dent in my floor. The solo work is magnificent, it also must be said.

Very easy to waffle on all day about this one. You like Death Metal? Just fucking buy it. Maybe that should have been my whole review all along! (The Great Mack)