Rituals of the Dead Hand – With Hoof and Horn 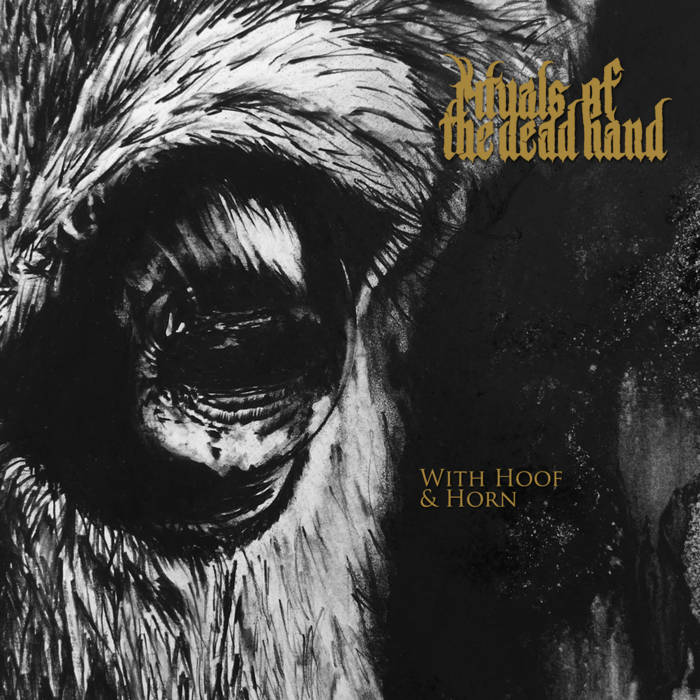 Two years and a half after their debut “Blood Oath”, Dunkelheit Produktionen do release the sophomore full-length album With Hoof And Horn by Flemish act Rituals Of The Dead Hand, part of the sweet collective The Nox Entity. This band was formed in 2016 by Hemelbestormer members Filip ‘Lykaios’ Dupont and Frederik ‘Isangrim’ Cosemans. Both of them are involved with several other (mostly great up to excellent) bands, which proved the high quality of 2018’s Blood Oath.

This second album was recorded at the Crestfallen studio for the better part (drums excepted) and mixed + mastered at Studio 8 with Jan Lathouwers, who worked on the debut as well. This time, the duo was assisted by their colleague Ief ‘Beleth’ Peters (bass). The physical release appears on compact disc, which does include an eight-page booklet (including the lyrics, which are partly in English and partly in Flemish), and on three different vinyl editions (limited, evidently).

With “Hoof And Horn” deals once more with the so-called Buck Riders, the ‘Bokkenrijders’, a horde that always intrigued me a lot. It was a gang of robbers, thieves, bandits, murderers, ah, just some nasty people, which was active during the second half of the eighteenth century in an area of Limbourg, the ‘far-East’ of Flanders, and just over the current borders with the Netherlands and Germany. This mob was also considered as a troop of Satanic canaille, flying through the night while seated on goats, bucks, raping women and children during their raids – a nightmarish mystification strongly strengthened by the clerical elite because of this gang’s rampages on cloisters and abbeys. Anyway, I am not going to deep into the historical content of this fascinating yet despicable horde of rogues, but as said, it was a very interesting horde with even more intriguing legends and myths behind their existence.

Just like the debut, this second full-length album consists of four lengthy pieces (and one short introduction), clocking forty-three minutes. Also from sonic point, With “Hoof And Horn” goes on in the very same trend as “Blood Oath”. That means: an extremely dense and burdensome mixture of Doom-Death and Black Metal with a grim and asphyxiating atmosphere. The tracks are timeless for sure, yet hugely inspired by the Nineties-scene, and totally lacking any form of post-modernism or progressive avant-gardism. And you know, the sound quality makes this whole experience sound so evil, so obscure, so claustrophobic. Okay, the whole is finely mixed for sure, with an equally divided appearance of all voices and instruments, but the recording result is garroting and usurping. That massive sound, evidently, strengthens the morbid approach remorselessly.

There is quite some variation on various levels: the speed, the addition of explicit vocal contributions (like spoken words, tortured and wretched yells or ceremonial choir-chanting) and the strongly related and cohesive yet, at the same time, remarkable amalgam of different genres included. With the latter I am talking about the injection of elements from stuff like Sludge, Morbid Metal of Death (the Old School way), Post-Black and Funeral Doom Metal (!). It would be way too stupid to dissect each of the tracks individually, for the whole acts like a majestic concept. The entire album is based on dark-dramatic melodies (no, luckily not of the melancholic or artificially-emotional kind) and harsh, down-tuned riffs especially, with a monumental rhythm section, a few tremolo-led leads and hypnotic melodies. The use of mouth-harp, some synths, a semi-acoustic fragment and a few samples too, subtly used for sure, is a modest yet absolutely fabulous addition to make the whole experience sound so gloomy, ominous, abstruse.

The better part is, as mentioned, quite slow in execution. Actually, the most of the time these pounding compositions vary from very doomed (and once in a while it’s almost static) to mid-tempo. Damn, this creates such overwhelming, heavy-weighted atmosphere. Once in a while, things sort of accelerate as well, and a couple of times an energetic outbursts works devastating. Still, the combination of a dense, nebular sound and the sluggish tempo works intoxicating, and the few solos, for example, add a level of frenzy and malignant supremacy. And so do, as said, the few harsh and speed-up eruptions.

Rituals of the Dead Hand