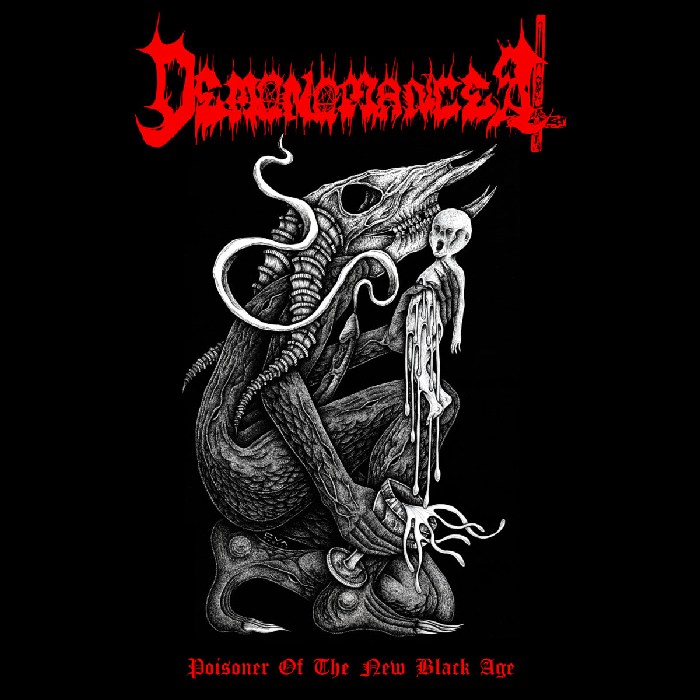 Demonomancer is a one man project from Julio Ardón, label owner of Bestial Desecration Records and Noise for the Nations. The band hails from El Salvador and between 2013 and 2016, the band released 2 demos and 5 split albums. Since all their releases were very limited in their released copies, this 2017 compilation provides us with a full anthology of all songs released by Demonomancer so far.The original 2017 was a limited cassette release on Metaltifus Productions, but has been given a re-release on CD and Vinyl by Dunkelheit Productions.

Now, for the music. As with many bands from Latin America, this band comes up with a chaotic mixture of black and death metal in its extremest form. The production varies greatly on this release, but never reaches any level above subpar… perfect for this type of warmongering stainless metal. I’m sure the public for music like this is limited, but there still are plenty of maniacs out there who thrive on this sort of filth. The riffs are mostly hard to discern, which adds to the chaotic frenzied feel. Most of them seem to be pretty basic, with a punkish feel. The drums seem to prefer a gallopping stampede of the snare drum, only exploiting the slightest accents and breaks to build a minimal structure within the songs. The level of the songs definitely does get better towards the more recent releases, as does the level of the sound (with some exceptions, ha ha). Strong point are the deep. distorted and raspy vocals that are vomited over the whirling music like a stream of boiling acid. Demonomancer always remains firmly within the deep, dark, ominous pits of extreme metal hell. Most songs are rather short and to the point, and don’t always manage to keep ones attention. Great taste for song titles, though. ‘Degenerated Satan Semen’, ‘Astarte Liturgical Sadomancer’ and ‘Christendom Cumslut’ just to name a few.

As a whole, this is an enjoyable release for those who are into the likes of Beherit and Revenge, but also for suckers for bands like Slaughter, Bestial Warlust, Blasphemy ofcourse and early Impiety. Demonomancer is most certainly not a world shocking release, far from it to be honest, but I have a weak spot for gargantuan insanity like this music. (Stijn)