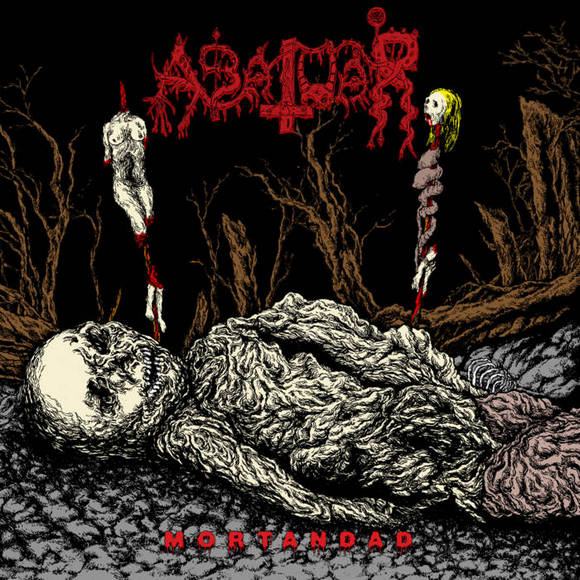 And Abatuar from Panama are back! After their rotten debut from 2017, “Perversiones de muerte putrefacta”, “Mortandad” is the new album.

The production and song writing/performance have improved since the debut, the drumming is way better, the songs are more cohesive … in other words: there is progression to be found on the new album.

Being labelled as Bestial Black/Death, Abatuar dish out a chunk of primal Grindcore, genre Terrorizer/Blood/Defecation, combined with raw blast beats, extremely down tuned guitars that create a filthy chainsaw sound and quite disturbing murky bestial growls. The overall ambiance on the album is utterly dark, foreboding and bestial satanic.

The rotten riffs being showered aplenty all over this album are memorable and perfectly fit the music, backed by a merciless and thunderous rhythm section.

Production is, as stated earlier, awesome – creating a powerful sound that brings out all the instruments and that adds to the bestial dimension of the music. Song titles and lyrics are in Spanish – I will spare you the translations.

This is how Bestial Black Death Metal was intended to sound people! Kudos to Dunkelheit Produktionen for unleashing this foul beast upon us!

Those who have the demo compilation and the debut are in for a real treat.

All others – you have been warned. (LCF)