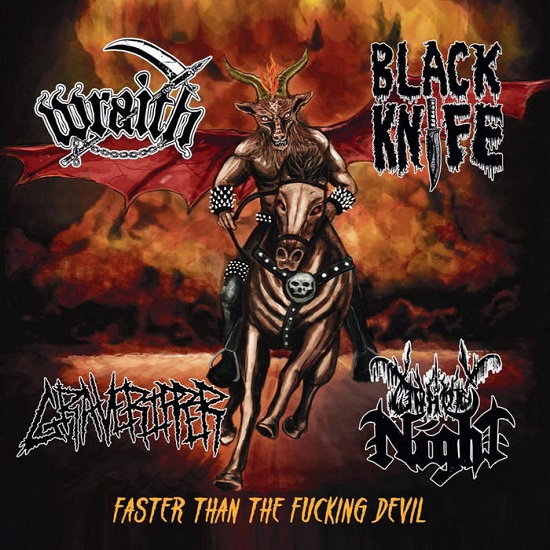 There won’t be many better release names this year than ‘Faster Than the Fucking Devil’. And it’s a very fitting moniker for this four way split release brought to you by Wise Blood Records. Introducing the participants; firstly from Kentucky, Black Metal/Punk trio Black Knife, Indiana’s Black/Speed/Thrash Metal/Punk tyrants Wraith, and then Moscow, Russia’s Black/Speed Metal demons Unholy Night, and last but not least is another Indiana band, Black/Thrash/Speed Metal merchants of death, Graveripper.

Wraith get things kicked off with three tracks of fast paced Blackened Thrash Metal, starting with the instantly catchy ‘Demons of Doubt’. If any track was going to be used to get this filth encrusted ball rolling then it had to be this one, sporting as it does a massively memorable chorus, a frantic and relentless drumming style, sleazy growled vocals and Motorhead style riffs and bass. Of particular note are the bass heavy over tones and technical guitar solos of ‘(Call Me) The Destroyer’ as well as all out assault of ‘Seven Serpents’. A great sounding band and one very similar in style and approach to an up and coming UK act by the name of Devastator.

Up next are three tracks from Black Knife, whose punky bass laden and down right nasty brand of Black Metal increases the volume, insanity and aggression still further. ‘Land of the Dead’ is an outright head banger with more bass leads than guitar ones and a savage symbol heavy drumming style. ‘Gouge the Eyes Out, Steal the Soul’ is an intense lesson in pure unadulterated violence and they finish up with the sledgehammer blow that is ‘Satanic Commander’ which sees Black Knife at their rawest yet, featuring visceral shrieked vocals that could cut glass, as well as a slower, deadlier and far nastier passage towards the end. A must not miss band who fit into this split like a hand into a glove!
On to Graveripper now and the fast paced, bass heavy beastliness of ‘Mind Filled With Dread’ whose chainsaw like riffs and crushing drumming display showcase a band at the fore front of highly aggressive, deathly Extreme Metal! ‘Night Frozen Black’ has the sheer speed of Enforcer but with the darkness and sheer savagery of Venom, as well as showing off some of the bands more technical chops in the form of iron like guitar leads. Graveripper finish with ‘Tomb of the Oppressor’, easily the best song of the three sporting as it does catchy lyrics, driven intensive riffs and some interesting guitar melodies too. Graveripper are easily the heaviest band on the release thus far!

It seems to be the ‘In’ thing these days to hate all things Russian, but fuck that and fuck the ‘Current thing’ as Moscow’s Unholy Night fucking slay! There are only two offerings from Comrades from across the Baltic, starting with the very suitably named ‘Louder, Angrier’. Unholy Night are not the heaviest band to feature, and their sound lacks a lot of bass, but they are angry, raw and unrelenting from start to finish, as they produce an alcohol sodden bout of fast paced punked out Blackened Speed Metal fury! It’s pure rabble rousing in musical form and I’ll wager they kick serious arse in a live setting. A tip of the hat goes to some marvellous guitar solos as well as the throaty vocal rasp of singer Adok. Final track ‘Ancient Rites’ is another barbaric blast of Blackened Punk, like Tank Girl running over Venom!

This is forty minutes of your life that you’ll want to repeat again and again, and good news, this is music so you can repeat until your hearts content! Listen to all of the bands, and whilst your at it check out the phenomenal Wise Blood Records too! (Marksson)