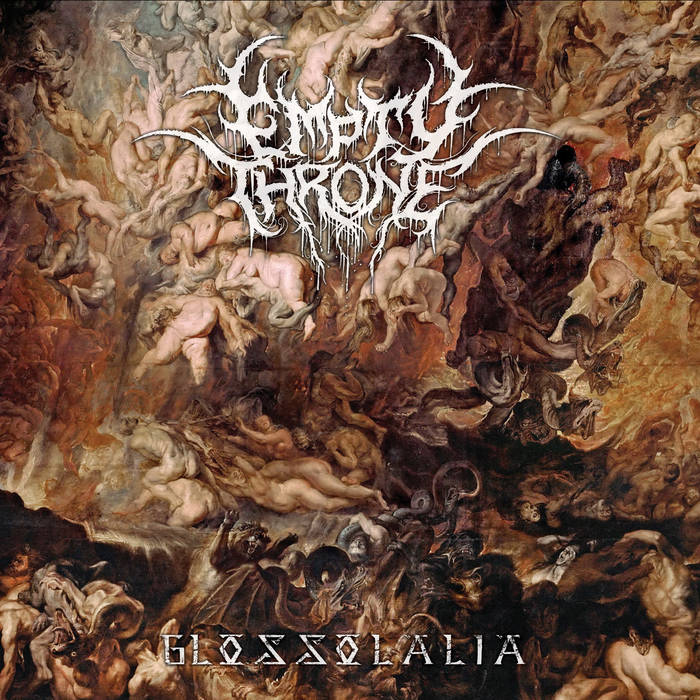 Empty Throne is a freshly formed quartet initiating members active in Angerot, The Kennedy Veil, Innerfury & Suffer. “Glossolalia”, which translates to “speaking in tongues”, is their lengthy three track debut EP, demonstrating that their outside projects have NOTHING to do with what resonates among this Blackened (melo)Death/Thrash metal entity.

Album cover was an original painting “The Fall of The Damned”, created by Baroque Flemish artist, Peter Paul Rubens, & was also a piece of another album cover that was reviewed previously for Serocs’ “Vore”.

Bit of an extensive time length clocking in at 23 minutes, with each song consisting of densely knitted production, vocals that fluctuate from being comprehensively hoarse to throwing bits of disquieting screeches & themes ranging from hailing Lucifer’s existence, humanity’s parasitic demise, & fond vampiric narrative, leaving you to wonder how the fuck you would categorize them, short answer being you can’t. Opener “And All Shall Know His Name” narrates vivid context of liturgical observance using immolation to summon the evil one. With combustible inception, Gabe Seeber’s blast beats commence, enthralling, transcendent, Melodeath riffs courtesy of Mike Pardi ignite, along with Chad Petit’s harsh blend of thundering howling cadence causing propulsion fueled by their vitality. Reminiscent of Dissection’s “The Somberlain”, but with concise polished production.