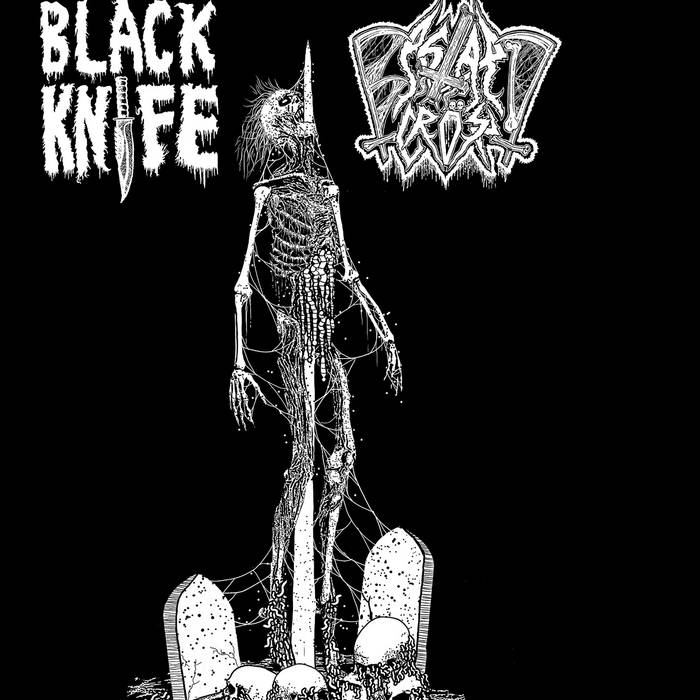 This year has seen an unholy release between two fine American purveyors of filth and degradation. Philly horde Bastard Cröss have collaborated with Kentucky beasts Black Knife (a firm favourite of mine following their ‘Murder Season’ album as well as their Wise Blood Records four way split) for this hellish bout of uncivilised musical barbarity. Like the debut Bastard Cröss demo, this has put out on cassette by Unchained Tapes, but will also see the dark of night through Jems Label and a cool looking 7″ vinyl release.

Side A of this squalid little affair is five minutes/two tracks from Bastard Cröss, ‘Into the Mausoleum’ which highlights the bands progressing thrashier chops when it comes to the riffs and also displays a much higher quality of production and mastering than their demo. This might be my favourite Bastard Cröss track yet, its fast, crunchy and has vocals that sound like they belong in a horror flick. ‘Death Rendered in Steel’ is all about punishing bass and brutal drumming technique, plus more rampaging brutality. Both songs combined show just how far Bastard Cröss have developed in such a short space of time.

Black Knife are one of my favourite bands right now, thanks to their invigorating sound, catchy style and zero fucks attitude. They kick off side B with the very apt ‘I Am A Fucking Demon’ which is everything you’d expect from Black Knife; bass heavy, direct lyrics and fast chaotic sound that hooks you right in. Then again, at a minute in length it has a lot to fit in very quickly. At a more dizzying length of just over two minutes, the more Punk styled ‘Edge of the Knife’ is a smoother, but still gruesome ending to this fantastically grim and murky split release. (Marksson)