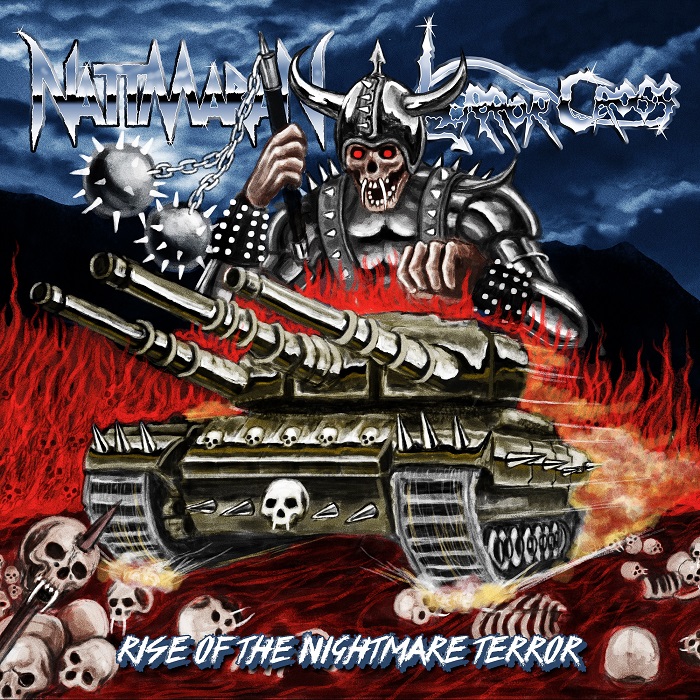 Spikes, skulls crushed underfoot, shooting flames and a huge fuck off tank. All adorn the eye catching cover art for the brand new Wise Blood Records split release that sees Swedish/Indonesian Black/Thrash/Speed Metal merchants Nattmaran collaborate with Finnish Blackened Thrashers Terror Cross in a rampant bout of aggression and wanton destruction. Ironbound Records will also get in on the act with a superb looking cassette version.

In another life Nattmaran (An old Swedish word meaning nightmare) went by the moniker Unholy Tenebris. As of 2020 though the band have been under their current guise and this split release comes on the back of their debut album ‘The Lurking Evil’, also released on Wise Blood Records. Their side of the split is heavily focussed on Speed Metal, five tracks of fast paced riffs with ear rattling high pitched vocals, punishing bass and drums to match, and all enshrined in gloomy uneasy production. Whilst their sound is pretty one dimensional the speed with which they play and the rampaging nature of their sound carries them their first four tracks before closing things out with a cool sounding cover of ‘In Conspiracy With Satan’ by Bathory.

Finns Terror Cross have been on the go for the past decade and following a couple of quick fire albums, ‘From Hell’ and ‘Skull Metal Armageddon – 10 Years of Burning Tormentor Steel’, they come into this split with a large amount of momentum. Whilst Nattmaran focused more on Speed Metal, Terror Cross have a far bleaker, blackened and thrashier sound. Theirs is a catchier groove entirely and the rampage through four tracks with darker, and far more growled vocals. For four songs they batter and ravage their way through their journey with wild sounding guitar leads and blistering bass play and drumming display, before finishing on a raw version of Manowar’s ‘Gloves of Metal’.