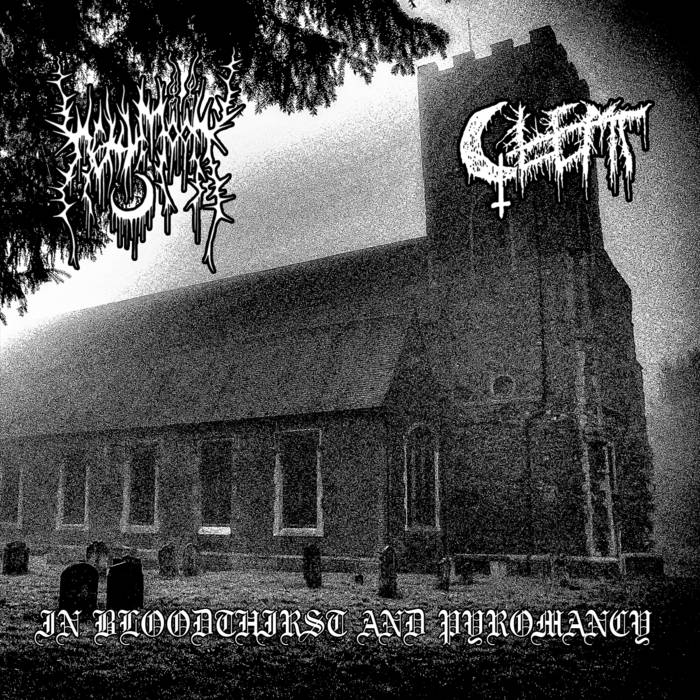 Two fantastic Black Metal solo projects in one split with this one. The split is titled, “In Bloodthirst and Pyromancy” and the first side is a pair of tracks from Glemt, the second track being an ambient outro. All instruments and vocals are done by Orobas, who hails from the United Kingdom. Glemt has a very aggressive sound from top to bottom. Primitive riffs steeped in grim coldness with some melodic parts mixed in as well. But overall Glemt has a merciless and icy sound here on this split, which I personally love. Something really great about this release is the vocals. Orobas provides a mournful, depressive wail as a contrast to the barbarous riffs. Really great synth/ambient outro to the Glemt side of this split as well.

The opposite side of the split brings us the infamous,  Hellmoon. Solo Black Metal project spewing out frozen Black Metal Winnipeg, Canada. All sounds created and recorded by Plääg, who is none other than Funeror of Nocturnal Departure. Hellmoon’s sound is a combination of minor melodies and raw, harsh sound and riffs. It takes a real talent to be able to find such a perfected synergy between dark melodic musicianship and cold Back Metal riffs. Too often do I find a band either way too “raw” and almost unlistenable, or a band is too melodic and overproduced or not “raw” enough. Both tracks on the Hellmoon side bring a feeling, an ambience that Black Metal fans are looking for. I find that both projects on this split offer an escape from modern metal and bring forth a true convocation to the sound of Black Metal in the late 90s and early 00s. (Fetid Priest of Pestilence)