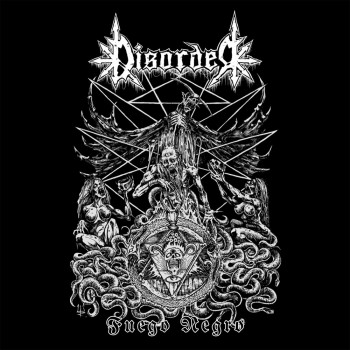 Morbid Skull Records from El Salvador has released some enjoyable Extreme Metal. This time it is Disorder, a band the owner of that very same label, M.Q, formed back in 1994. “Fuego Negro” is the third album and although everything is sung in the Spanish language, it seems to deal with the violence within the Salvadorian Civil War between the military-led government of El Salvador and the Farabundo Martí National Liberation Front (FMLN). One can imagine a war with Death Squads and the likes, is suitable for lyrical content for a Blackened Thrash/Death band. Disorder definitely has Thrash as main course and the 2 other styles as side dishes, all played in the early 1990s way. Although the attitude and basic riffs are 1980s Old School Thrash, some of the melody in the riffs are more the 1990s Swedish scene kind of Thrash. You just listen to the main riff in the beginning of a track like “333”, and you get a “first-album-Soilwork” kind of vibe. For me, a bit of a setback, but this is only occasional. If you are a fan of albums like Deceased’s “Fearless Undead Machines” and a mixture of Bay Area Thrash and Teutonic Thrash (both of the early 1990s), you can give this one a try. (Ricardo)