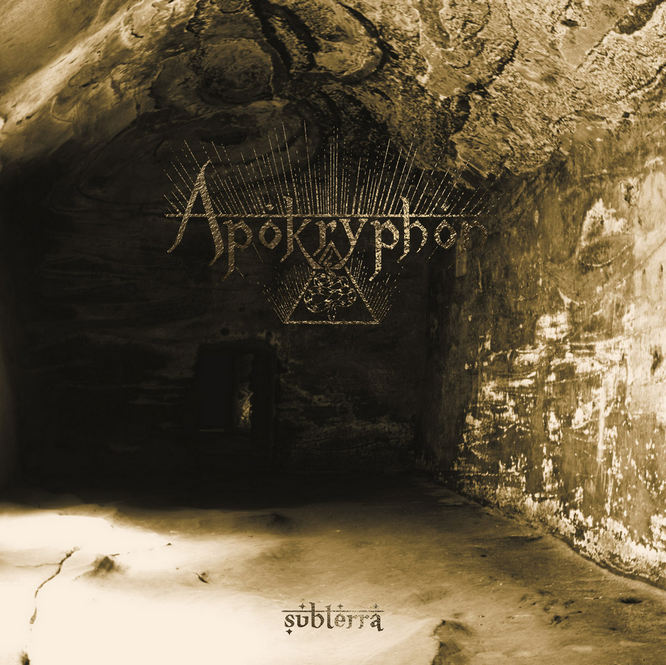 When Progressive Black Metal is adorned with millennia-old Oriental music, you’re left with Apokryphon. Formed by Darkspace’s Zorgh, here signed as Ophis, Apokryphon thematically explores the heretical texts of Apocrypha, and so much more. She is featured on all instruments and yet unheard-of Djinn gives an amazing vocal interpretation. It’s best we dive right into it!

“Evangelion of the Serpent” does a phenomenal job leading us into the album. 12 minutes in length, the song’s ritualistic elements are an extensive warm-up and support for an unexpected and very dynamic Black Metal riff which is to come halfway through. That first track is an announcement of the whole album, a hint to listen to the whole piece, and look for the story hidden in an ambient of organized chaos.

Combining the intensiveness of Black Metal with primitive rhythms, “Subterra” sounds like it could awaken long-forgotten deities. The record takes us to mysterious, often ceremonial atmospheres of ancient times, showing their darkest sides in the best light. The songwriting and album composition are amazing. Every experience in this record is delivered in a perfectly balanced wave of energy that Apokryphon release in just the right way, at just the right time. Also, keep in mind that a bassist formed this project so the songwriting also takes a shift toward that sometimes undeservedly overlooked instrument. I’d recommend the track “Anthropos” for you to see all “Subterra” is about if you don’t feel like listening to the whole thing right away.

This spoke to me personally a lot, so I must give deeper personal insight as well, which isn’t necessarily right nor wrong. I feel like, conceptually, the passage of time and connecting seemingly unrelated things: ancient past and present times (like connecting the two main musical influences of this record) is not only the main “focus” but also the main personified character “Subterra” explores. What I mean is that time is an active actor in this story, and I really appreciate music that can express that matter because it’s not sonic in its core, but rather story-telling and philosophical.

Apokryphon is, fundamentally, an expression of freedom in the waters of often dull, if not in its way conservative, Black Metal. It’s a celebration of man, knowledge, time; in a unique and personal manner. Ophis said that this is just “the beginning of a story”, so consider yourself lucky to be able to follow it from its very start. If you’re missing out on Apokryphon, you’re missing out big time. (Lana)