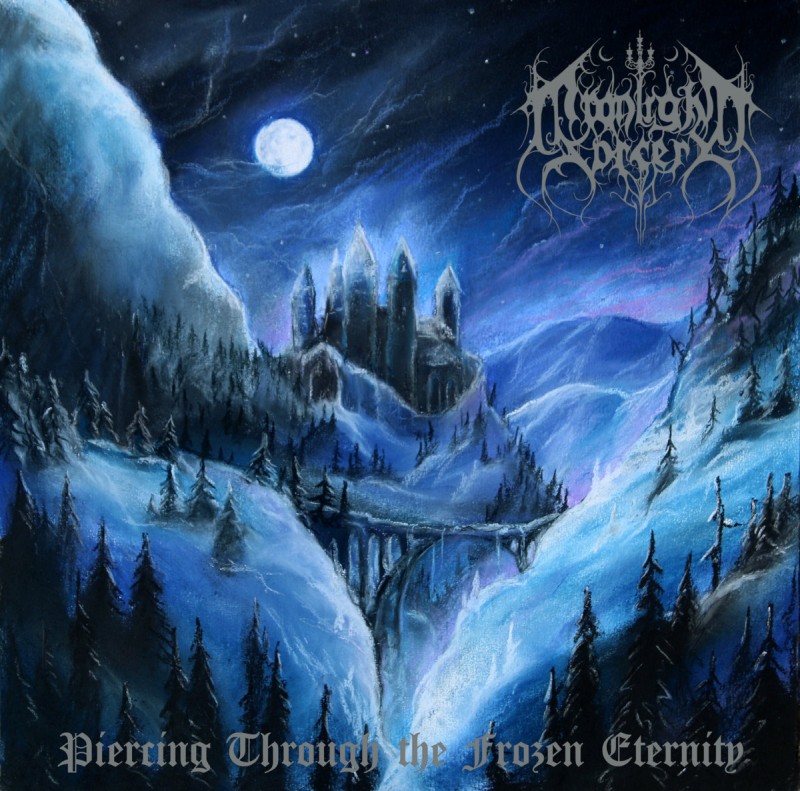 At some point in the history of Black Metal it was something that was laughed at exclusively: melodic Black Metal, or symphonic Black Metal if you will. A genre that has been mocked and ridiculed for years, times that you were not allowed to say you liked keyboards in Black Metal. And although there currently is an upturn in (high quality) low-fi Black Metal, that is mostly recorded and released out of dark and dusty bedrooms and garages, there is also a different movement going on. A renewed interest in 90’s melodic Black Metal. Not only have classic albums been reissued and even albums that were completely ignored in those days get their often well deserved (vinyl) reissues, but there’s also a lot of great new bands coming up.

Over the past few years we’ve seen (and heard) a lot of great bands that proudly play this niche genre in Black Metal and showcase their musical roots. One of the most promising newcomers is this Finnish Moonlight Sorcery.

On ‘Piercing Through Frozen Eternity’ Moonlight Sorcery manages to impress with really adventurous, multilayered Black Metal. Bombastic and symphonic, yet relentlessly fast and sharp. The unorthodox song structures, accessibility and especially the outstanding guitar leads (that would not be out of place in, let’s say, Sonata Arctica) not only makes this a truly unique experience, it also shows the excellent musicianship of this new three-piece.

It is therefor not a surprise that the band was quickly picked up by Avantgarde Music, which is going to give this self-released digital-only EP a very much deserved worldwide release on various formats. If you are into bands like Vargrav, Obtained Enslavement, Diabolical Masquerade, Limbonic Art, Emperor or Odium (to name a few), do yourself a favour and get it.