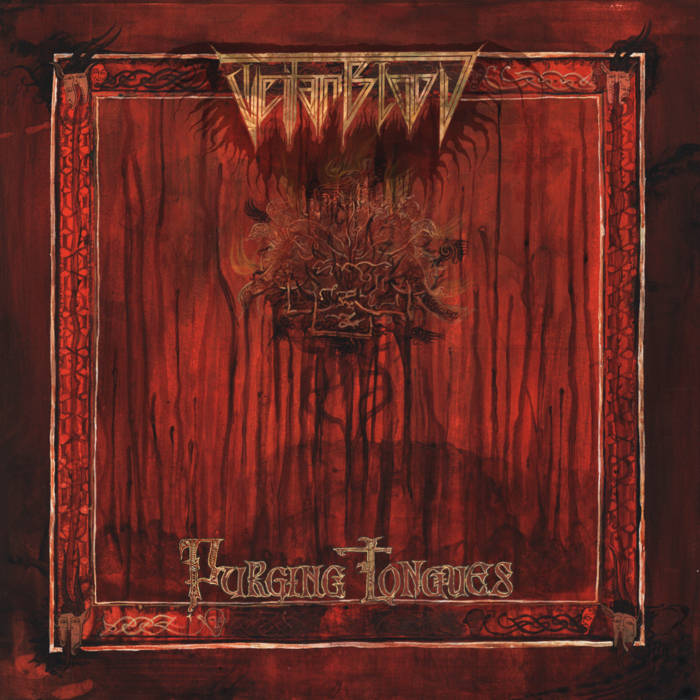 Originally released in 2011 as a single-sided 12” EP, ‘Purging Tongues’ recently got a reissue in a new cover and with the etched B-side being replaced for a different take of the same track.

Teitanblood needs little introduction, as they have built on a reputation of being the Spanish embodiment of the filthiest, grittiest and scariest of Death Metal. Incorporating many a Black Metal influence and also that violent grinding edge that typified those Ross Bay Cult bands. Together with defunct Proclamation they were the Spanish answer to bands like Blasphemy, Archgoat and the likes, drenching themselves in an impenetrable darkness and chaotic beauty.

‘Purging Tongues’ was the first recordings the band offered after their highly acclaimed ‘Seven Chalices’-album from 2009. While that album is widely regarded as a true classic in pure and dark Death Metal with all of its black, grinding intricacies, the EP offered a rather surprising twist as it is only had one track of a whopping 15+ minutes. Though ‘Seven Chalices’ also features some rather lengthy tracks, ‘Purging Tongues’ shows the band from a little more versatile side, incorporating more dynamics with slow dragging sections. Yet, it never gets in the way of the band’s violent and chaotic nature. So, ‘Purging Tongues’, though being a slightly different bite, naturally fits in the Spaniards’ discography.

For unknown reasons it was not possible to repress this EP in its original form, including the etched B-side, so instead the band opted for a total overhaul of the revered EP. It now appears with artwork of the ever-amazing Dávid Glomba, but most prominently, it features a ‘new’ track, which actually is ‘just’ an alternative version of the original ‘Purging Tongues’ track. While the original was already rather lengthy, this one is even longer, clocking nearly 18 minutes. This take on the song is even darker, scarier and more dragging than its original, making it a perfect fit to the artwork.

In case you have missed out on this 12” EP some ten years ago, you are now able to pick up this revamped version. But, die-hard collectors aside, if you already have the original pressing, I could imagine you passing this one as I don’t think the alternative version adds a whole lot to the overall experience.