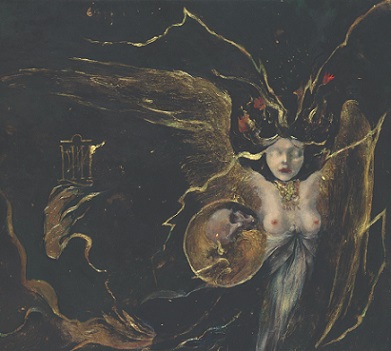 It`s a pleasure to see that a band that is around since more than 2 decades, which didn`t put out a thing since 12 years, comes back with a new album (17 years after the first) which is so fresh, dark and black to the core that most recent releases could be thrown in a trashcan. Altar of Perversion from Italy did exactly this. This album has everything what black metal defines. Starting from the artwork done by Denis Forkas (Behemoth, Altars, Erebus Enthroned,..) to the production which is well balanced, with your typical thin guitars, a more natural approach to drum sounds, clean bassguitar sound, raspy vocals and everything not too loud in the front. It helps the album being listenable and enjoyable without being exhausting because of its loud and powerful production that other modern productions are known for. In terms of diabolical hymns, the songs are long, changing face and shifting into amorphous spectres spawned from the black abyss.  There`s a lot of single picked chords to create a reverie-like atmosphere, carrying the listener into other dimensions, with excellent lead melodies being layered above the carpet made of hypnotic riffs. It has some great bass work (indeed some standalone work here) and drum work which has everything a good song/album needs (beat variations, tasteful cymbal pattern, fills and dynamics). The vocals as already mentioned are raspy, not too high pitched, with a certain rawness which spits fire and poison towards the modern man. The vocal lines are enchanting, being sung in a somehow monotonous way but the words being stretched and all of a sudden changes into a narrative depressive voice for a short time (like Acherontas’ V. Priest uses regularly) and hell breaks loose afterwards. Speaking about it, the album has a lot of parts which reach an Acherontas or Abigor vibe, being very captivating, hypnotic, dark sublime and forward-thinking and in the meantime orthodox in its core and philosophy. Although the songs are long and in some parts it has repetitive riffs but it`s never boring. There`s too much going on in each song and If you let yourself go and sink deep into their realms, you`ll find more and more details to be revealed. Between the songs there is a red line, a drone starts and ends the songs and binds them together. The journey is longer than an hour (nearly 2) and worth every second of it. In terms of releases its again quality against quantity. I do not hope so, but I`ll wait some 10 years plus again to receive another excellent release from Altar of Perversion…If necessary. BLACK METAL IS ART. (DPF)