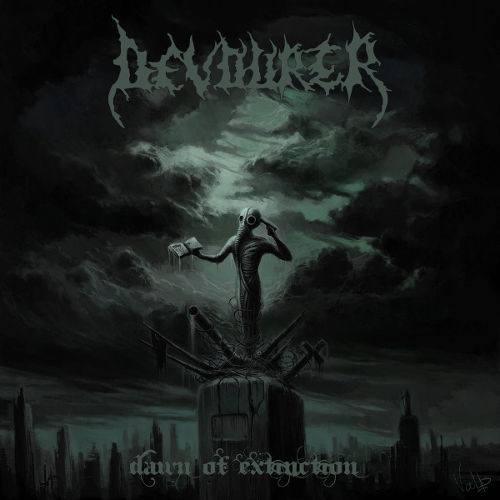 The third full-length of Devourer from Sweden has been lying around a bit…but it has been picked up! With John Falk and Fredrik Håf in the ranks, first one known for his work in Sorcery and the second one for his vocal duties in Sordid Flesh and Patronymico, Devourer have chosen the dark and black path to walk on.

“Dawn of Extinction” starts furious with tracks like “The Sculpting Hands of Doom” and “Beast of Famine” which is a mix of less melodic Naglfar’s “Harvest” with Dark Funeral, but later on the album get hold back with a tracks like “Evighetens Bila” and “Of God’s Ruins”. Personally I don’t think the dark and slower passages are taking the song writing within Devourer to a higher level, while the faster parts are definitely solid.

I think this would be a very good EP if they would only release the songs of “Dawn of Extinction” where the focus is on up-tempo. (Ricardo)