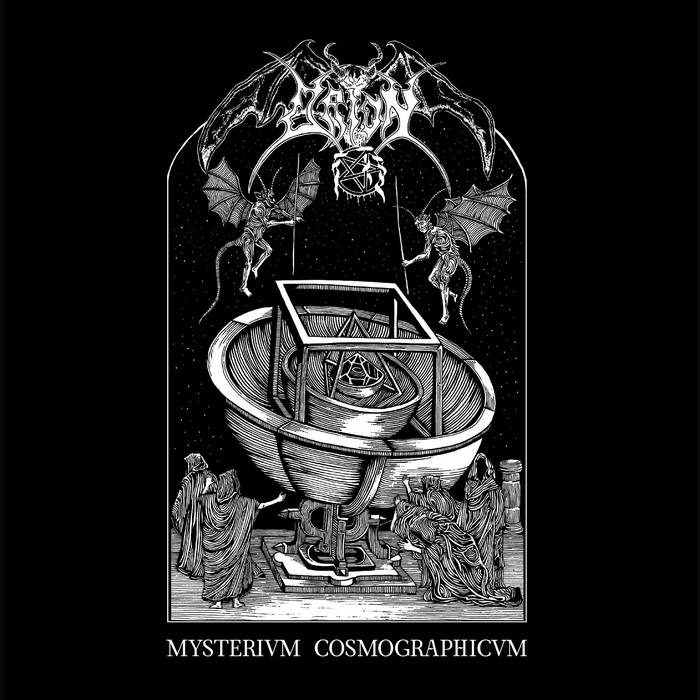 Iron, Blood and Death Corporation, is surely a treasure cove of unearthing underground metal, whether it is Death, Black, Speed, Thrash and old School Heavy. Without any doubt, their current roster is one hell of a maze to counter with. Out of nowhere, they always appear and out of them, I have seldom been able to resist the allurement of exploring rare and exotic names from mighty south Americas. South-American landscape, where many great ancients once roamed and left many creations that still haunting modern era human minds. The Chileans of Orion, surely another such haunted wanderer into cosmic mystery, who are seeking, exploring and expressing the multiverse and its unfathomable mysteries with their bewildering mixture of Thrash and Death Metal.

Orion has been around since 2001, and took considerable number of times to forge and release their debut demo ‘Pulverizing Skulls’ in 2005, followed by another demo “The Seven Gates Are Opened…” in 2007. Then comes forth silence. And, it’s for fourteen years. Speculating that, the Chileans might have meet star peoples or entities from beyond, and happily taken away by them to receive revelations about Universe and Cosmology. And, after 14 years of journey, the Chilean are back to share their revelations in sonic form with their debut full-length, titled “Mysterivm Kosmographischvm”. A title, which doesn’t belong to any specific linguistic form, but easy to realize, what it tries to convey. Mystery of Cosmos and far beyond. Sound wise, the quartet seems to have stopped its clocks in 1985, at the blessed period of the first Possessed, Onslaught, Sepultura, Pestilence, Slayer, Sodom, Kreator or their compatriots of Pentagram. On the disc, nine tracks of absolutely retrospective music for which the group has not forgotten any element to make us visually and audibly relive the era of the genre’s roots. And quite frankly, to listen to the 34 minutes it offers: banal thrash metal riffs, typically murky atmospheres death, scratchy vocals and hellish drums craft. Of course, it goes very quickly from start to finish: rhythmic level, we are of course in speed, sometimes intense, but with remarkable precision. The incessant hammering by means of a percussive drum, on which the Chileans gave themselves to their heart’s content with great means of ruthless accelerations.

Now, each nine track seems like arranged with a vision to make everyone have their own visuals and thoughts. Although, writing down song by song of all these visions may sound gibberish to any reader. But, who cares, as I can’t resist to put my own visions after listening each track and returning to each one many times. As in the beginning with ‘Of being and becoming’, which like an invitation into blur of muddled horror, of crawling, sick revulsion from the supernatural vileness to be beheld. From there ‘Sourl procession’ appears, which evoke the horrific spectra of Possessed and the darkness of Weapon and have the force to drag anything down with its formless, ever-clinging weight into gulfs beyond the reach of created flight or the fathoming of organized entity. ‘The Way of Truth’ then comes as a baffling and mystifying one, for a sorely troubled mind that seeks truth in a whirlwind of chaos and madness. As the seeking was too baffling, the next track ‘The Unreality of time’, can be explained as – Time, the thing is infinite and, at the same time, ghastly. ‘Unreasoned Perceptions’, reminds the challenge of such seeking and in doing so, I could not have been more hideously startled as if some hellish conception of Francisco Goya had suddenly come to life and emerged from one of his creations, where perception is beyond any reason still unreasoned. Like this hideous vision and perception to be continued, ‘Epinomis’ appears like forged in blackish phosphorescence, where atmosphere smells like burning sulphur. Surely a change of atmosphere but this insidious atmosphere, will make you prepare for the upcoming ‘Uttermost Absence’, where the impression will be as suggested in the title. The change of transitions here are so instantaneous, so utterly without effort or visible transition that it reveals the song-crafting skills and imaginations of the Chileans. After being totally baffled by such experience, ‘The Wanderer’, will remind, despite all the endeavors to explain the cosmic mystery, we will always be a wander, and all efforts are merely hallucinations. However, after such bewildering journey, you may think such profound mysteries can’t simply mere hallucinations. And, to the end of this record with ‘Witchery War’, where intro acoustics with its moldiness of antique charnels and the fearsome progressions, I found myself staring into the verminous, apish warfare…only to return to reality.

And, in reality, it was almost like, I had suffered a visual hallucination that might mark the beginning of some obscure cerebral disorder, or had been visited by a spectral phenomenon, by something from realms and dimensions that are past the normal scope of human perception. With such experience, it’s sufficed to say that the strong analogue production worked overwhelmingly and will keep any exposed one engrossed and enticed from beginning till end. With all these, in this debut offering Orion offers straightforward Thrash/Death Metal in the best of tradition of and on course to established their own sound. Released with an equally mystifying Cover design by Ibay Aryfin, represents the whole visual spectra of “Mysterivm Cosmographicvm”. This will surely evoke many thoughts of what or what not this means, while pondering the Tape, CD or Vinyl’s. Also, shall be enough to entice to explore countless times. Even though, this is just the beginning of 2021, but it won’t be unwise, if any exposed listener going to consider “Mysterivm Cosmographicvm”, as one of the finest and fascinating release of the year, and also from this mesmeric continent.  (Randolph Whateley)