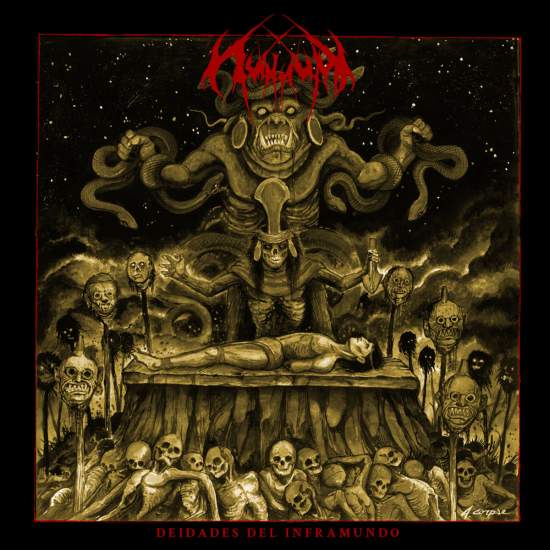 Tunjum from Peru was totally an unknown name for me. So I played the album with curiosity, not knowing what to expect. The name of the band doesn’t tell me anything and I couldn’t find translation of it either. So there we go into unknown seas with “Deidades del Inframundo” which translates to “Deities of the Underworld” and that is what you get on the cover. Some kind of shaman performing human sacrifice on the altar towards ancient deity of South America.

A short intro and we get to main point of this album which is Death Metal. I must say that the vocals are really good, they sound almost as coming straight out of hell. Problem is that the rest of the music doesn’t stand out as the vocals. It just plays somewhere in the background and you don’t remember much about it after a while. Production in general isn’t bad. Its just the vocals seems to be in front and rest of the instruments seems to be in background. You can feel that especially in faster parts. All the instruments seems to blend in one chaotic mass and only thing that’s good are vocals. But there is a good part also, besides the vocals. And they are the slower parts, which to me are the strongest thing in Tunjum music. Suddenly you can hear the whole band and even bass is audible.

Unfortunately there’s not enough of those slowdowns on this album to make it interesting.The biggest problem with this album is that nothing stays in your head. I gave it some time and quite a lot of listening and really wanted to like this album. But unfortunately something didn’t connect. Don’t get me wrong. It is quite well performed music, maybe little bit to clean sounding for my taste (and maybe not to well mixed in the studio) but after those 8 track i don’t remember much of it. It just goes in the background and fades away. I don’t fell any need of playing it again when there’s other bands around that do Death Metal better. (Sulphur)