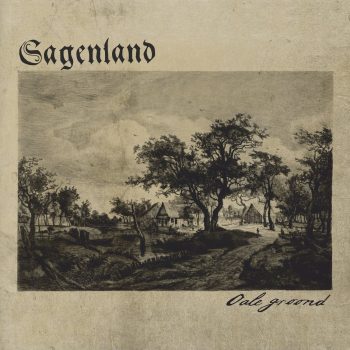 Despite the fact that Sagenland has been around since the early 00’s, 2021’s ‘Oale Groond’ is only their first album. Earlier, in 2005, they did release a split LP with the already defunct German Vargulf, but after that it was a decade and a half waiting for the next sign of life. Where many might have thought Sagenland had died a slow death, Floris Velthuis (Meslamtaea and Asgrauw) and Arjan (Cultus and Uuntar, among others) must have been quietly working on this debut album. And even more so than the musician’s other work, Sagenland highlights local myths, sagas, nature and environment and this is also mostly sung in the local dialect. ‘Oale Groond’ means ‘Oude Grond’ in common Dutch and translates to ‘Ancient Earth’.

Musically, it is introduced by a midwinter horn, which is an instrument somewhat similar to the more commonly known alpine horn and which playing is a tradition in certain eastern regions of the Netherlands. Between the first Sunday of Advent and Epiphany, this blowing takes place only at dusk. The story goes that this custom has its origins in the Germanic yule festivities, which are celebrations that took place around the midwinter solstice in December and were renamed Christmas with the Christianisation of Western Europe.

Experts doubt whether midwinter horn blowing really has an origin so deep in history; many argue that this tradition ‘only’ started about 100 years ago. Whatever you wish to believe, this intro provides a perfectly fitting backdrop for ‘Oale Groond’. An album deeply rooted in the fascination for ancestral history. This theme also reflects in the music itself, folk-like acoustic pieces and clean vocals regularly pass by. This makes for a dynamic experience, also offering counterpoint to the otherwise smoothly played Black Metal. The good and quite clear production gives sufficient space to the raw guitar sound and especially the musical background provided by acoustic guitar, surprisingly creative bass and the subtle keyboards. Yet, ‘Oale Groond’ is definitely no Folk Metal album. In contrast to the so obvious inspiration from local traditions and beauties, a somewhat more northern influence can be heard musically. It sounds a little more than regularly like early Ulver, for instance, with room for the organic grandiose Black Metal of ‘Bergtatt – Et Eeventyr i 5 Capitler’ as well as the mesmerizing acoustics of ‘Kveldssanger’. In the more aggressive or more traditional Black Metal pieces, a certain Taake or Gorgoroth vibe can also be detected. Arjan’s distinctive ultra-raw vocals, so familiar from his many other Black Metal projects, also provide that pure Black Metal edge. However, it is mainly the organic and multi-layered sound and dramatic scenicness, to which the acoustic passages contribute a lot, that leaves the lasting impression.

It may have taken a long time for both gentlemen to get around to recording this debut album, but it sounds well thought-out with good attention paid to song writing and establishing a natural flow and sound. And where more and more bands choose to sing the praises of their local environment, traditions and history, be it Saor, Drudkh or, for example, newer acts like Blackbraid or Oerheks, Sagenland just fits into the current musical landscape now more than ever. (FelixS)