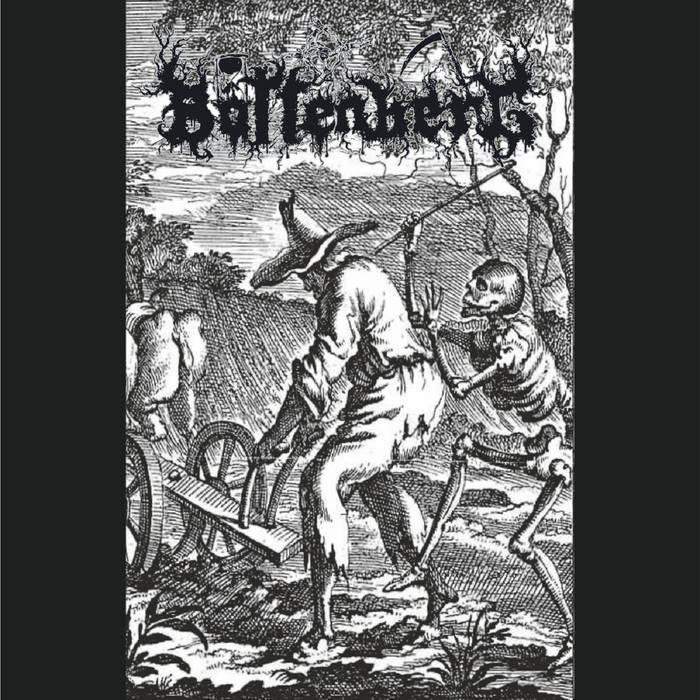 Unearthed from the soil of the Dutch Twente-region comes Bottenberg. A new one-man Black Metal band, led by the illustrious figure who calls himself De Bottenboer. For non-Dutch readers: Bottenberg translates to Bone Mountain and De Bottenboer to The Bone Farmer or The Bone Peasant. It is clear what we are dealing with: primal Dutch Black Metal. As a warming-up for the debut album De Bottenboer first offers these three tracks, presented on tape for you by Heidens Hart.

Due to the sinister poetry that is sung raspily but intelligibly in Dutch, a comparison with Cultus or the sadly demised Fluisterwoud are not just random guesses. A parallel with the Norwegian equivalents Darkthrone or Taake would not be out of place either. This, however, could lead to the conclusion that Bottenberg plays nothing more than standard Black Metal. That would not even be close to doing justice to Bottenberg. Although ‘standard Black Metal’ is in no way a disqualification for me, this ‘Demo 2022′ shows that it has more to offer. The catchy melodies and for instance the kaleidoscopic intros on ‘Het Fantoom’, of which the lyrics were written by Asbestus (of fellow Dutch Black Metallers Wrok), and ‘De Verderfelijke Pestilentie’ give the songs enough of their own identity and with that the bands’ raison d’être is more than secured. Despite the fact that these are ‘raw’ versions of the songs that will eventually end up on the yet-to-be-released album, the production is already nice and clear and provided with enough texture and contrast. That mid to late 90’s sound fits nicely with the repetitive riffs and the repeating melodies that together provide a more than suitable basis for the leading role of the vocals and great and well-written lyrics.

Eventually these songs will end up on the debut album ‘De Laatste Onrustplaats’, which will also be released through Heidens Hart. This is definitely one to keep an eye on, because for me this is one of the most promising demos of the year.