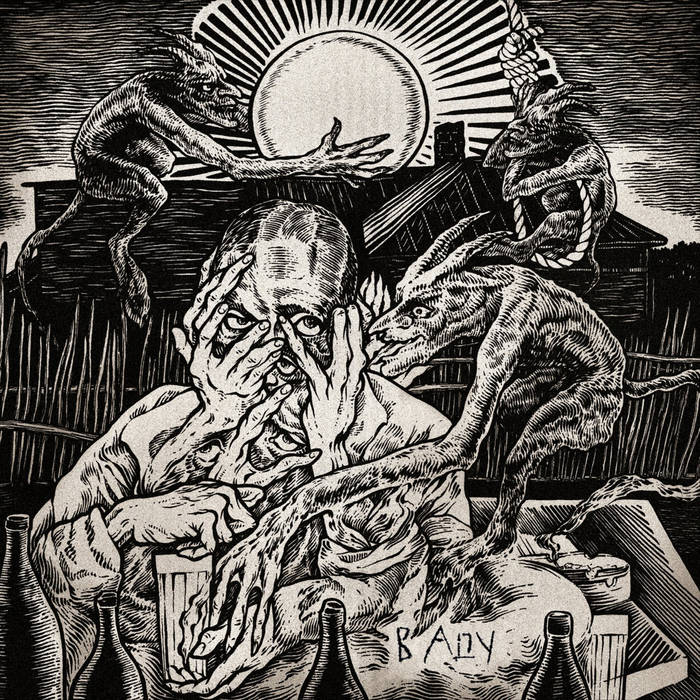 After its debut EP via Russian Death Knell Records, this avant-garde ensemble found shelter with the never-conventional Aesthetic Death on which the first full-length album, ‘В петле’ (‘In The Noose’), was released in 2019. This may well have escaped your attention, it did for me, but if you are not averse to a musical adventure and are ready to try some new flavours, it is definitely advisable to have a taste of this.

Zatemno’s music is typical of the kind that can’t really be described well and is better just experienced. The band is described by Heidens Hart as “Russian hooligan folk music, optimistic and doomed“, to which the band goes on to add “Rope, hammer, knives! They are true, always true“. What exactly all that means is hard to pinpoint, but it seems to fit the band’s schizophrenic music just perfectly.

This world of contradictions is also the musical nature of this trio, who also gained experience in other strange and experimental acts such as VTTA, Neon Scaffold and Cage Of Creation. The latter is perhaps best ‘known’ for their split LP with Denmark’s Múspellzheimr on Amor Fati Productions. While listening to this second album, ‘В аду’ (‘In Hell’), together with Zatemno you plunge into a whirlwind of different musical angles and creative ideas. This leads to an extremely unorthodox mishmash of Black Metal and Folk elements. Reasonably organic-sounding Black Metal riffs duel with up-beat accordions, so that it sounds pretty much like Finntroll at their most frivolous (‘Jaktens Tid’) and the roaring bass guitar does a dance of joy with the punk-like drums. Comparisons are drawn with bands like Fleurety, later Lugubrum and Peste Noire, these certainly make sense, but in the process I can also definitely hear 80’s avant-garde punk and wave, like early Nick Cave & The Bad Seeds, for example, reflected in the music. Perhaps that is also the strength of these Russians’ music, there is clearly no holds barred or other kinds of limits to their creativity and thus it also gives the listener all the space to get something out of it for themselves. And although it might not all be Black Metal, the violent and barbaric nature of the music reflects just that and offers a very exciting listen.

The paranoid and schizophrenic-sounding music, without clear marking points, unconventional choice of instruments and unorthodox musical patterns, might be somewhat reminiscent of a Black Metal variant of French acts Wormfood or Carnival in Coal. One song is a bit more experimental than the other and for the average Black Metal listener, this will really be a bridge too far anyway, but for the true adventurers and musical explorers among us, this is more than a rewarding experience. (FelixS)