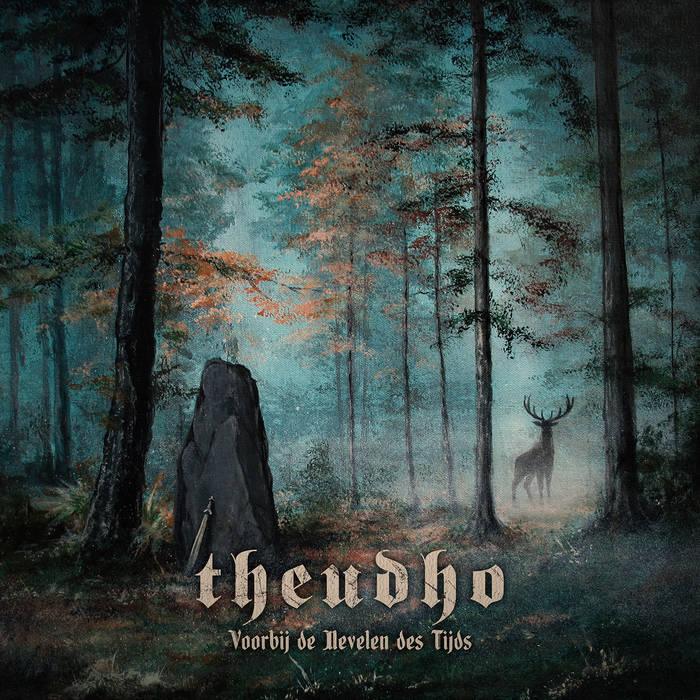 Founded as early as 2002, Theudho is currently one of the longest running Belgian Black Metal bands, and with its rather impressive output, the (now) one-man project left quite a mark on the local scene. Though, it must be said that the last ten years Theudho was a lot less prolific than the first decade of its existence. The band’s last offering dates back to 2018, when ‘De Roep Van Het Woud’ saw the light of day. But if you have been put on a diet, it tastes extra good when you finally get something to eat again.

Though in twenty years Theudho did evolve musically, its very core is still basically intact. Its perseverance to bring Pagan-fuelled Black Metal has only drifted the band further into musical perfection. So, comparing ‘Voorbij De Nevelen Des Tijds’ (‘Beyond The Mists Of Time’) to the band’s preceding work, is not all too difficult, as the main thrust of Theudho is still building its rich epic heathen vibe to the firm fundament of ancestral Black Metal. Going through Theudho’s discography you’ll notice that the balance between both of these key elements in its musical scope tends to tip a little more to one side at times than the other. And frankly, as hardly any band’s discography is completely flawless, not everything has always been equally balanced on its musical canvas. Yet, on ‘Voorbij De Nevelen Des Tijds’ it seems that Jurgen has led his vessel to rather steady waters and struck a near-prefect equilibrium in both its Pagan feel and its folky-tinged Black Metal. You’ll get served with the full musical spectrum, ranging from soothing and folky acoustics to fiercely fast blast beats, getting Theudho into enough dynamic territories to prevent the music to sound too one-dimensional. But, on the other hand, it is definitely not as exuberant, or jolly even, that it bears resemblances to all those too Viking-like beer toasting bands from the late 90’s. In fact, ‘Voorbij De Nevelen Des Tijds’ is an unpretentious, modest sounding, honest piece of work that requires a bit of your attention to fully let it unfold itself.

I think it is fair to conclude that Theudho has delivered its very best work to date, not only musically, but I think the sound also contributes to a satisfying listen. Not raw, in the sense of a rather standard, gritty sandpaper-like blur, but the album certainly is not a polished piece either. This also further enhances the overall experience of a rather humble, but well-crafted piece of art, which I honestly find remarkably refreshing.