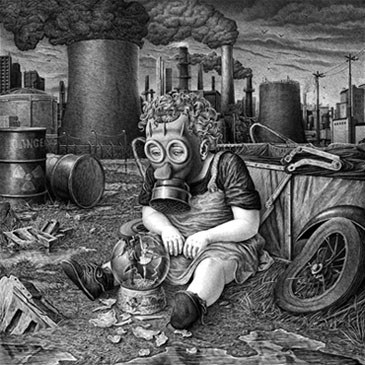 Melody. Melody has many faces. Melody can he “heard” differently by every single one that dares to analyze it. Melody is everywhere, of that I have no doubt. Melody is in Black Metal. In the end, Black metal is Melody.

I had seen this artwork, but had never had the urge to give their music a go. I studied Arts, and I care a VERY BIG DEAL about the aesthetic of the Music and the ways the artist communicates, and this cover artwork and the label Black Metal… it did not click. I respect those that take things outside the genre’s close borders, but I am still living inside them… and for that reason, and that reason only, I did not jump on the hype that was built around the band and the release.

The Netherlands. The Dutch Black Metal scene is growing, in terms of quality and in terms of exposition. Better known, by me, for their Raw Black Metal scene – hey, The Throat – Black Metal has never been unknown for these chaps. Known for giving us Anneke van Giersbergen – sorry, fanboy – Funeral Winds and Cirith Gorgor, new – and not so new – bands have been showing up, and giving the scene new elements and helping its evolution.

Meslamtaea have been around since 1998, having released their first LP in 2004. 2019 sees the band releasing their second piece of Black Metal. The use of melodic guitars to reach an atmospheric and melancholic overall sound, is the main focus of the band. They float between that Melodic Ambient and those Black Metal Raging instants. Mid-paced passages, spoken-word, acoustic guitars… in pursuit of Melody, everything is put into use.

They capture what was first created, in the 90s, by Norwegian bands. That amazing feeling you get of having already heard a sound, a melody, years and years ago, and being able to place it, today, in a contemporary band, is perfect. The sound captures the image, flawlessly: a post-apocalyptic reality, in which Death and Sadness walk hand in hand. The vocals also project that same feeling… in the end, it is much more than just Black Metal. the spoken parts, accompanied by the eerie guitar work and the “on the spot” drum scheme, quickly jumping into abrasive Black Metal screams, and back to melodic vocals… the guitar riffs! The amount of melody you grab throughout the full length of the album, is immense. A bit like the vocals, the guitar goes from full on Black Metal possessed, to Doomish moments. One must/should sit and absorb all those little elements that are “hidden” in the songs.

Melody is the main goal of music, from my perspective. One, when creating, thrives to achieve THAT  melody and, with that, being able to project its arts onto people. These Dutch chaps have that gift, they create melody, they write music, music that emanates ugliness dressed as beauty… (DanielP)