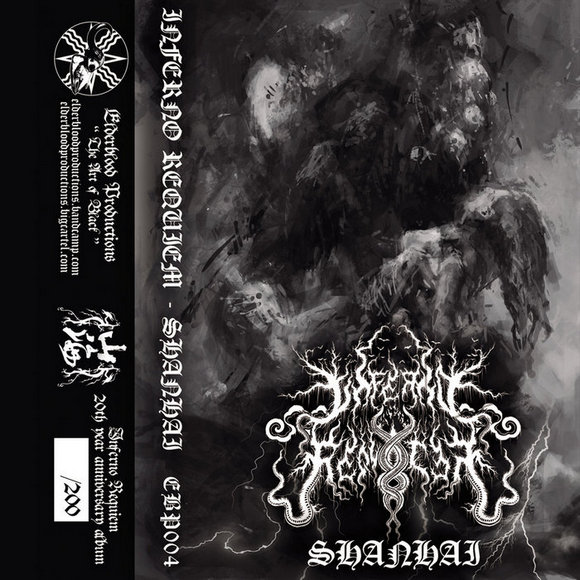 Initially formed in 1999, Inferno Requiem is a Taiwanese black metal project and brainchild of the multi instrumentalist who goes by the monicker of Fog. After a hiatus of almost 9 silent but undoubtedly very creative years, Fog resurfaced, releasing several full length albums and EP’s. This project has been around for almost 2 decades by now.
“Shanghai” is his latest opus.

Inferno Requiem are often compared to bands like Sargeist, Satanic Warmaster and even Drowning The Light because of the raw vocal style and abrasive music. However, there is much more behind Inferno Requiem that meets the eye, so to speak. The album opens with dreary sounds of rain and distant thunder before “Lost Clan, Wrath of Forsaken Beast” erupts in full force. The raw, yet emotional necrotic vocals, blastbeats, sandpaper guitar sound and subtle agonizing keyboards are overwhelming and grandiose at the same time. Lyricwise the album deals with Eastern mythology, ghosts, warlords, villains and glorious battles of old. Just listen to gems such as “Sacred Throne with Serpent Totem” or “Ghost of Coldness and Despair”.

And even though the guitars are raw, there’s some hint of epic melancholy to be found. It’s also amazing how the keyboards manage to intertwine with the rest of the instruments without being too intrusive. “Shadow Lurking in Obscured Ruin” is but one fine example. Vocalwise, Fog blows all fuses, this time. By listening tot his album, you can hear him expressing the uncanny wrath, venom and depressive sadness of the tales he tells. Productionwise, “Shanhai” is state of the art. A perfectly balanced, heavy and clear yet raw sound.

Fog has outdone himself on this album. “Shanhai” is a MONSTER of an album!! It stands proud amongst the great and the CD comes in a stunning A5 format digipak. Fans of aforementioned bands are advised, nay compelled to check out “Shanhai”. And while you’re at it, check out his previous releases as well. (LV)