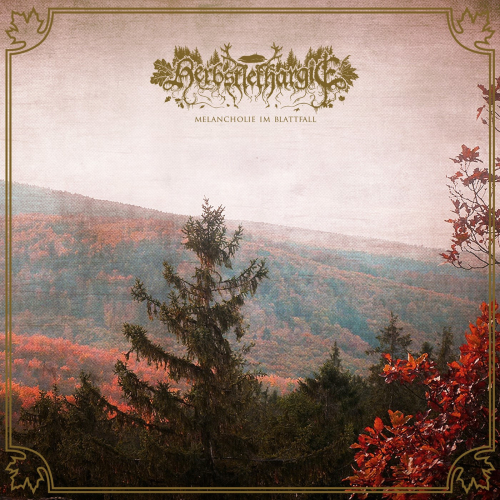 It is a common phenomenon: with the leaves falling, the weather getting drizzly, the exchange of your summer coat for a waterproof one, the human psyche gets into trouble. It is the confrontation with the ephemeral and the decay of all life. The memory of spring and summer fade away. The cold sets in and life moves mostly further indoors where it loses spontaneity, vibrancy and intensity. In other words, autumnal depression.

It is against that light that Marcus Röll, operating here under the name of Herbst (Aumtun in German), turns his spleenful feelings into music. Using this one-man project as his personal vehicle, he paints those feelings onto the canvas in warm autumn tones. This results in what could be described as a feral Atmospheric Black Metal journey. While listening to ‘Melancholie Im Blattfall’ (‘Melancholy In The Fall Of Leaves’), you can almost smell the soggy soil and the aromatic scent of the first rotting leaves from the landscape of the beautiful album cover. Contrary to possible expectations, the music, besides being melodic and emotional, is also quite fierce and solid. The Melodic Black Metal prevails and is driven by smooth and rather fast paced drums, proud guitars and howling vocals. In the somewhat slower parts, some more Folk elements emerge, mostly in the form of gloomy keyboards and strings and even flute (a duduk to be precise, an Armenian flute). Through all the elements and a nicely balanced sound, the whole takes on a pleasing and organic character. It is only occasionally that the folky melody goes a bit overboard and thus misses the mark a little. This can be heard on ‘Die Wälder Brennen’, for instance, not a bad song per se, but it is laid on so thickly that it breaks the atmosphere a bit. Perhaps it even sounds a little too optimistic, which of course contrasts with the rest of the album and the otherwise clearly present message and undertone. It is, however, perfectly clear that Marcus comes up with a more than successful debut album with which he proves to be a very capable multi-instrumentalist.

In my review for Ellende’s latest album, ‘Ellenbogengesellschaft’, I already dispraised terms like Post Black Metal or Cascadian Black Metal. After all, it’s just what label you want to put on which, if at all. My claim here is that almost all the classic Black Metal bands people look up to also added truckloads of (atmospheric) folk elements to their music. Without those key elements, there were no bands like Ulver, Satyricon, Kampfar, Borknagar or Enslaved. And there were remarkably few complaints on the music of later acts like Agalloch, Empyrium, Drudkh or Falkenbach, just to randomly name a few. That the above terms are now given a somewhat negative connotation is a shame and influences audiences in negative ways, without sincerely listening to the actual music and intentions. In any case, what the bands in these styles have in common is that they have a primordial desire to transform all that into hypnotic and mesmerising Black Metal, all with their own vision and emphases. In that tradition, Herbstlethargie also perfectly fits; Marcus gives an interesting insight into his own psyche and musical visions. He does so in quite an impressive and emotional way, in which he finds the (almost) perfect balance between Black Metal on the one hand and the creative and atmospheric freedom the genre offers on the other.

As explained in the essay-like bit of prose above, Herbstlethargie fits just perfectly in the current metal climate. While there are many bands that take their Black Metal into crude and ultra-raw Lo-Fi territories, there are more and more bands emerging that can proudly hold up the flag of Atmospheric Black Metal too. With all this knowledge in mind and Herbstlethargie’s music still fresh in my ears, I at least have an excellent soundtrack for this autumn season and, despite all the melancholy, I have high hopes for a bright future for this beautiful sub-genre.