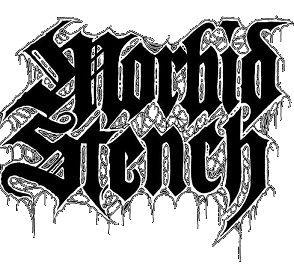 Morbid Stench…the music is like the band moniker. Heavy and dark Doom Death in the 90’s way, done by an experienced alliance between decaying souls from both Costa Rica and El Salvador. I had a little chat with Master Butcher, the vocalist of this fine act. And of course to ease you all in I ask Mr. Butcher if it is ok to start with how it al began…(Ricardo)

Sure friend, Morbid Stench started back in 2014 after Jorge (aka Morbid) and I did some trades in 2013. At certain point he proposed that I could contribute with some guest voices for a project he was working back then called Disorder so, eventually I ended up singing 2 tracks off their album “En El Rio Del Olvido”. We liked so much the outcome, so finally we decided to go ahead and form Morbid Stench.

The current line up is:
Morbid – Guitar/Bass
Purulent –  Drums
Me, The Master Butcher – Esophagus

We wanted to take the path of Doom Death for several reasons…first because in our current projects Death metal was predominant, you name it, Conceived By Hate, Invocation Of Death, Insepulto, Necrogod…so this represented a good chance to go somewhere else…beyond our “comfort zone” and explore a rich element as is the doomy side of music.

With this said, I find the doom a genre malleable, it can be combined with other styles and bring additional elements that strengthen the musical and artistic proposal…and that’s what we seek forth…and introspective journey through the music…a reflection of our inner selves.

Not to forget that the three of us are very much into classic doom stuff like Cathedral, Candlemass, Decomposed, Rippikouly, Krypts, to name a few…

Can you tell us more about your first release; the EP “The Stench of Doom” (Cassette released by Morbid Skull & Till You Fukkin Bleed)?
“The Stench of Doom” was our debut work and served to see the chemistry between each other musically speaking. When it came out, people received it very well and in general terms, we are very satisfied with the final outcome.

And what about your split with Necrogod “The Bifid Tongue of Doom & Death” (7″ vinyl released by Morbid Skull Records & Evil Domain Productions)?
The idea of that split came out when I travelled to El Salvador in 2017 to play some shows there and Guatemala as well. Originally the idea was a split with Morbid Stench & Insepulto (one of my other projects) but given at that time, it was inactive, we (Morbid Skull Recs Jorge’s label, Evil Domain Prods, whose owner was in that tour as well, and me) opted to go for Necrogod (another side project I work along with the Swedish musician Rogga Johannsson).

The production for both bands differ with respect to previews works, for example, Necrogod sounds much more crude and intense on the song “Burning In Disgrace”, while Morbid Stench got a bit “cleaner” sound production on the song “The Malodorous Crucifix”. I’d say reactions have been pretty good… but If you ask, me…I feel could have been better. 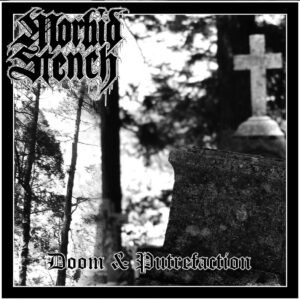 And moving on to your debut full-length; “Doom & Putrefaction” (CD, Cassette and 12” vinyl; released by Putrid Cult Recs & Morbid Skull Recs), an album I described as “Cryptic Doom Death with cavernous vocals in the old 90s style“…
Well, the “Doom & Putrefaction” was the natural step forward in the development of our concept as a band. We have never pretended to repeat formulas and so it occurred with the album.

Reactions have been good; we knew in advance the stuff on the album represented a more mature version of Morbid Stench. Composition wise, structures kept on evolving not necessarily to a more “complex” stuff but more into a cryptic stage allowing to show some of our own style, that Central American approach that combines influences from many many sources.

So far, this has been the release where more positive comments we’ve achieved and it was recorded half in El Salvador half in Costa Rica, the mixing and mastering went on to Sweden and for the cover we contacted a Mexican photographer called Mirella Ceron just days before having to define the cover.

We had another cover defined for the album, but we were not sure on using it…fortunately I found here in social media and liked the idea of having a picture instead of a drawing just like our previews 2 releases.

And again, you have recently released a split 7″, this time with the Dutch Death Metal band Anarchos.
Sure…after we finished the whole album work, the chance to release this split came in almost immediately…in January 2020 if I’m not mistaken. I was completely sure that if a chance like that appears, you gotta take it, despite we had just finished the album work – which for those not aware – is a pretty exhausting process. Nevertheless, we spoke (Morbid, Purulent and myself) and decided to go ahead with it.

Our song on that release is “Brethern Accuser” and shows a step forward more into a death metal sound, the song itself, has more death metal elements. It has been released recently so the few reactions we have received are good…Anarchos did an excellent work with their songs on this release so I am sure, the “Gospels Of Necromancy” will please most of the usual metal maniacs that follow both bands.

Do you consider any difference between the material on the split and the tracks on “Doom & Putrefaction”?
“Brethern Accuser” is a more death metal song. Its textures in terms of sound production are heavier and dirtier compared with the stuff on “Doom & Putrefaction”. Conceptually speaking…both are still very connected to the evil, dark and devilish stuff that is of our interest.

Ah, the lyrical concept, well…you brought it up; tell us more about the evil, dark and devilish stuff…
I write all the lyrics…not only with Morbid Stench but also with my other 2 projects…it is something I like to do but have no problem if someone else wants to contribute with something.

The way I write is, a combination of different approaches, sometimes I listen the music and get instantly what the song is going to be about…others…I listen the song and at certain point a phrase comes in and from there I build the entire text…some others…I write the lyrics in advance (w/o listening the music yet) and then I try to accommodate the lyrics through an appropriate phrasing…other times…I go the studio and start improvising…and some other times, is a mixture of all these.

The ideas may come for very various sources, in case of Morbid Stench, I read and investigate about religious concepts, mental diseases or ancient religions, historic incidents and so forth…you never know from where a good concept will show up.

Yes, actually we got composed our second album, 7 new tracks that continue our introspective journey…as a reference; I’d say stuff comes slower, heavier and with some elements of disharmonized experiences… 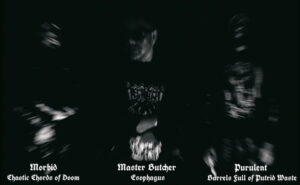 What will the future bring for Morbid Stench?
To continue evolving and growing as a band…not necessarily getting exposure to major audiences, that is not what we pursue. We want to be able to reflect ourselves in the music…and that goes beyond just composing new songs…making riffs…or growling some crazy stuff.

Please give us a sneak preview of your playlist, be it an old gem, new albums or some upcoming demo band of your region?
Right now I am very much into Gorement’s “The Ending Quest” album, Graceless “Where Vultures Know your Name”, also I’ve been spinning quite a lot Peruvian Mortem stuff, De Natura Daemonium & Deinos Necromantis, they’re at my top list of Latin American bands of all times.

From Costa Rica, I would mention the latest Bloodsoaked Necrovoid album, which came out recently, as well as Astriferous MLP…both are killer stuff and two of the most competitive acts in the Costa Rican underground…highly recommended.

From El Salvador…I got hooked with Invocation Of Death, a project of our drummer where he performs vocals, really good stuff, pretty much ala old Dismember…also there’s a band called Witchgoat which is simply excellent and not to forget Conceived By Hate which recently released their newest album and is a heavy weight of Central American Death Metal I think.

You, but also Morbid and Purulent, are involved with other acts and projects as well…and not only bands, aren’t you?
In the case of Insepulto we are working the songs for our 3rd album to come out next year through Iron, Blood and Death Corporation from Mexico and Total Pagan Madness Recs from Chile. With Necrogod the album is about to come on Transcending Obscurity Recs by late 2020 or early 2021.

In my case, besides the bands, I’m also involved with my distro service called Tmb Metal Distribution (www.tmbmetaldistribution.com) mainly focused on Death, Black, Grind, Doom and a bit of Thrash.

Morbid does Morbid Skull Recs, which in my opinion is the best Label from Central America given the level of “sophistication” in his releases and overall operations. He has been putting out some serious ass kicking stuff lately so you can pass the label’s bandcamp at www.morbidskull.bandcamp.com and check it out for your self.

Purulent is focused on Invocation Of Death and after the album came out last year, I understand they are working new stuff and before the Covid 19, they were pretty active playing shows.

Some years ago I used to be part of VM Underground zine when another guy was in charge (the famous Frederick…do you remember him?).
Well, you got things a bit mixed up here. You started at Archaic Magazine when Fredde was in charge there (boy, do I remember him…I still receives his reviews to publish them, working together with the Belgium Disaster for many years now) and when I started VM-Underground you have written reviews again for a couple of years. Unfortunately you only have 24 hours in a day as well, so you spare time is limited. Hope we will work together someday again…

In addition,  do you have favourite labels you always keep an eye on when they announce a new release?
In my case and due to the distro mentioned above, I keep in contact with several labels that put things worth of my interest. VIC Records, Hammerheart Recs in Holland, Floga Recs & Repulsive Echo Recs from Greece, Memento Mori in Spain, Dark Recollections Recs, Concreto Recs & Chaos Recs from Mexico. I like so much the stuff released by Sentient Ruin Laboratories Recs in the States…and of course, Morbid Skull Recs from El Salvador, there are several labels I definitely follow up.

Thanks Mr. Butcher for you time. Before we wrap up this interview, is there something I’ve forgotten to ask you which you would like to mention?
At all my friend…we’ve covered all the necessary stuff…thanks for the interest and support man, total respects to you sir. Stay Brutal ImI