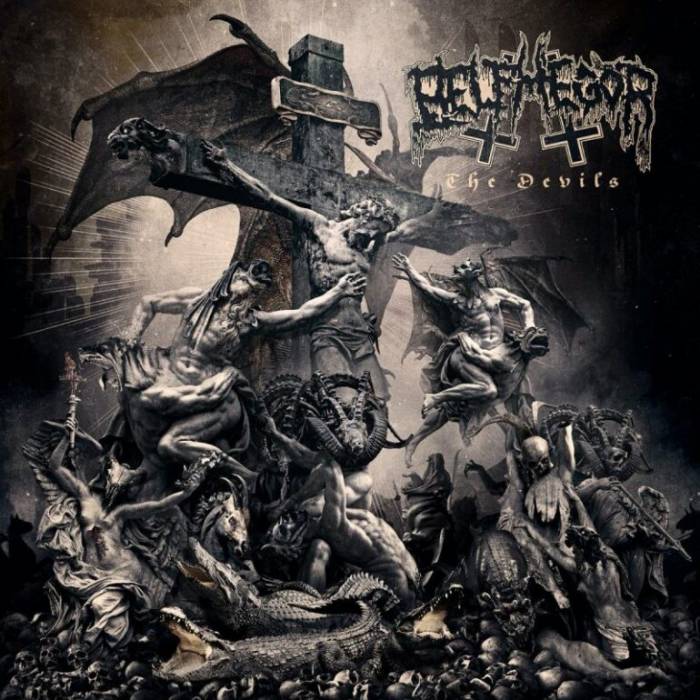 Admittedly, I had lost sight of Belphegor for a while. After the 2000 release of ‘Necrodaemon Terrorsathan’, I somewhat lost interest in the band. I did hear some individual songs, but I never tried to listen to a full album again. At the end of 2020 Nuclear Blast Records re-released ‘Necrodaemon Terrorsathan’ on vinyl and I decided to pick it up. That re-sparked my interest in the band, but not to the extent that I started delving into the albums that I missed out on. When earlier this year the early classics ‘The Last Supper’ and ‘Blutsabbath’ were released on vinyl and they also found their way to my ears via Spotify, it started to itch. Of course this was the prelude to a new album, through the usual channels I was informed about the upcoming release of ‘The Devils’. Apparently the commercial marketing techniques of Nuclear Blast work very well…

This is already the twelfth album of these Austrian veterans, so I had a lot of homework to do. After going through all the albums, I came to the conclusion that I have wrongly ignored the band for twenty years. There are some albums that are perhaps less essential than some of their best ones and ‘Blutsabbath’ still remains my absolute favourite, but the overall impression is that Belphegor has maintained a fairly constant level. Musically, there are some shifts and some albums have some slightly different musical contents, but the basis is still intact ever since the founding over 30 years ago. Belphegor-architect Helmoth has mastered the vicious but effective mix of Black and Death Metal in such a way that every album, despite possible differences (also in line-up), sounds unmistakably like Belphegor.

And so does ‘The Devils’. When we compare it with earlier work, this album sounds a bit less venomous and the pace generally is a bit slower. This gives the band a bit more room for musical variation, melody and even some exotic influences. But there is no need to worry, of course the gas pedal is still pushed here and there and everything is still drenched in the Belphegor-trademark kind of blasphemy. In the band’s so characteristic Black/Death sound, ‘The Devils’ now moves a bit more to the Black Metal side. Something the band can apparently handle very well. The first two tracks of the album are exemplary for the choice of style, dynamics and atmosphere of the album. Opener ‘The Devils’ is a riff-heavy and a bit more introvert song and on ‘Totentanz’ Belphegor pulls out all the stops, the song is carried by a very catchy melody and it gives guest drummer David Diepold (Obscura) all the space he needs to go wild. Even the addition of symphonic elements is not shunned by the band and makes ‘The Devils’ perhaps the most varied and surprising album out of the Belphegor discography. Closing track is the perhaps somewhat superfluous medley ‘Blackest Sabbath 1997’, a contraction of ‘Blackest Ecstasy’ and ‘Blutsabbath’ from the second album of, you guessed it, 1997.

Belphegor may sound less brutal and all-devouring compared to some of their earlier work, but on the other hand the band has gained in diversity and creativity. These are terms that I would not have easily attributed to Belphegor in the past, but they turn out to fit surprisingly well. For me, ‘The Devils’ was both a musical surprise and a reintroduction to a band that I have now taken back into my (black) heart.