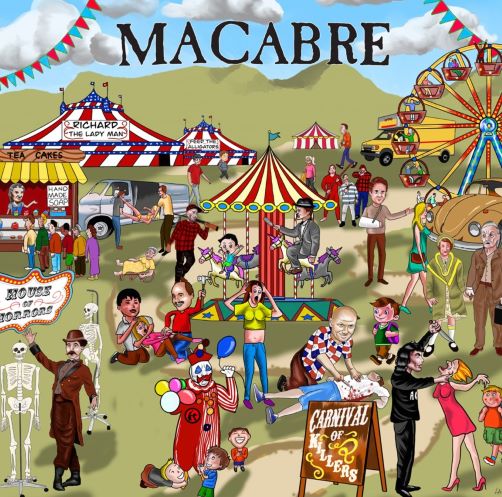 Macabre has always been a band that is unique in so many ways. Not only because of the obvious, their characteristic sound and lyrical content, but also because this is (about) the only band that has been around for that long (celebrating their 35th anniversary this year) without ever having had their line-up changed. This is without any doubt one of the secrets of their ongoing success of the past decades, though working on a tremendously slow pace, this being only their sixth album, appearing nine years after their last, “Grim Scary Tales”.

This album does not only marks the band’s return to the front after many years, it also marks its return to Nuclear Blast, for which they made the classic 1993 “Sinister Slaughter”-album. When it comes to the music, it seems not much has changed, the trademark sound is still there. The drum and bass-guitar driven sound with the crazy rhythms and the maniacal vocals of ‘Corporate Death’ are all still very present. A relief on one hand.

On the other hand there’s a creeping thought, a little uncomfortable itch. Though there’s all the Macabre ingredients to make it a ‘killer’ record, it gives much room for a second thought. And, though the band has always been tongue-in-cheek and had their own unique humorous approach of their lyrical themes on serial killers and ‘not-always-so-metal’-metal, Macabre is on the edge of pushing this all a little too far. Where the first three albums from the late 80’s and early 90’s definitely have a firm (Death) metal foundation. The two albums from the early 00’s (“Dahmer” and “Murder Metal”) still have much metal to offer, despite their already carnival-esque chorusses. On this “Carnival Of Killers” the balance is starting to get lost; with all the sometimes-funny musical themes (Singing Detective in “Them Dry Bones” and “The Wheels On The Bug” (“…goes round and round…”) for instance) there’s a real danger of Macabre becoming an unintended self-parody. Besides that, the riffs are starting to sound a bit worn-out, as is heard on “The Lake Of Fire” and basically all tracks on the second half of the album.

Still, with all the critical side-notes, there is still much to enjoy on this sixth installment by a still very respective band. And besides everything, their lyrics are still very much worth to read. I mean, who doesn’t like the tasty tale of Richard Speck, who killed eight nursing students and later turned into a male-prostitute in prison, dressed as the wives of the other inmates – including real breasts, that he grew after getting hormone treatments. You gotta love it! (FelixS)