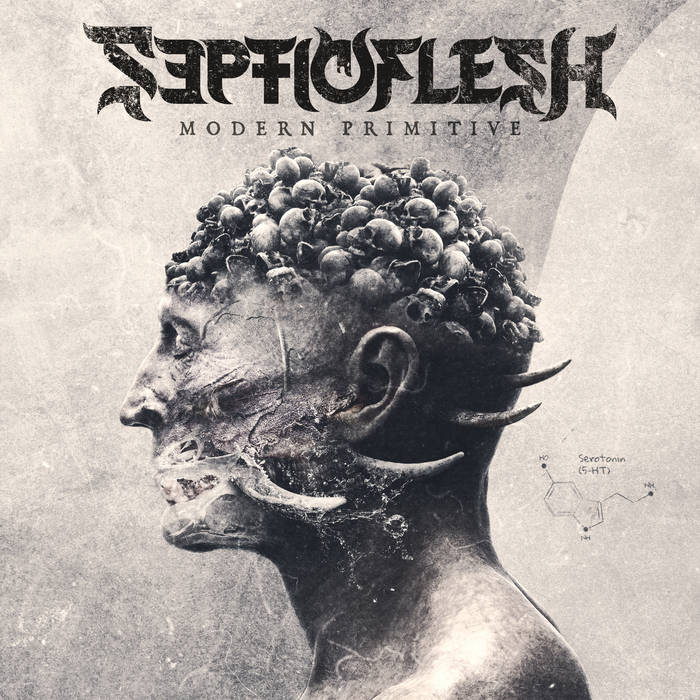 When the band fell apart in 2003 and arose again four years later, they not only slightly changed their name (from Septic Flesh to Septicflesh), they also pushed their creative, trademark sound to new territories. Ever since their inception, Septicflesh had a very distinctive sound that blended both classic Hellenic Black Metal with a Death Metal sound and lots of melodic gothic vibes, but their ‘comeback’ album ‘Communion’ (2008, Season Of Mist Records) revealed the band sporting a far superior and grandiose sounding than ever before.

Not all of the fans from the old days were happy with the slight change in sound and musical approach, but they definitely gained a lot of new admirers. The more slick and modern sound fitted very well to the path chosen, not so much comparable to Dimmu Borgir in their taste in Black Metal, but a similar way in orchestrating their craft can definitely be deterred. With ‘Modern Primitive’ Septicflesh delivers their fifth album since their return and prove once again that they are a band to be reckoned with. Its huge sound, fabulous dynamics and excellent song writing makes the album proudly stand in with all their records since 2008. Looking back at the band’s rather impressive back catalogue, it might not stand as their best feat, with the preceding ‘Codex Omega’ (2017, Season Of Mist Records) being their finest, this Nuclear Blast Records debut record still has the Septicflesh DNA deeply embedded. It has all the heavy riffing, Mediterranean acoustics and gothic-like atmosphere and the tight-as-fck drumming making the album sound as smooth and heavy as any of the band’s previous work. The difference with some of the best albums is that ‘Modern Primitive’ features no real outstanding songs that would be suitable for a Spotify or YouTube-‘hit’, instead the overall offered quality of the songs are a little higher. This results in a much more than decent album, but might be a little less memorable because of the lack of the inclusion of instant hit-material.

Because of the album being a bit more coherent and has less hooky tracks, it is more of an album that you need to listen to a couple of times to give it the chance to grow on you. If invested some times with it, it will unfold its greatness and you’ll see that this can bear the Septicflesh-name like no other.