The Lurking Fear – Out of the Voiceless Grave 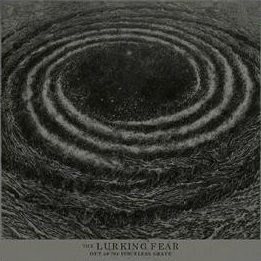 Anyone knows in how many bands Tomas Lindberg has played since the start of his career? No? Well, me neither, but that some bands with his signature are amazing and scored well among the million metal fans, that’s a fact. Take for example Disfear, Lock Up and the almighty At the Gates and you’ll shake your head and have to say: ‘Oh yeah baby’!! Well, a new band has risen under his wings and got the name The Lurking Fear, taken from the short horror story from H.P. Lovecraft. And they haven’t sit still since their start up, cause after already one year the first full-length album has been pressed and distributed. It got the title: “Out of the Voiceless Grave” and you can expect everything you thought would blow out of your speakers. A mixture of old school death metal with some modern injection, very fast vocals from the man himself, a grind touch, lots of energy and music that will create the needed dust into the pit. I already mentioned H.P. Lovecraft and also the music is inspired in the way this American writer tried and achieved to put fear into mankind when reading his books. The guitars from both Wallenberg and Stahlhammer are the main base on this record in my opinion, but also drummer Erlandsson who played in a bunch of bands cracks up the level with his drumming. Not convinced yet? Well, check out tracks “The Starving Gods of Old”, the furious “The Vortex Spawn” and “Winged Death” (also the title of their debut EP) and let the energy of this band fill you veins, you won’t cheated! (Fredde)