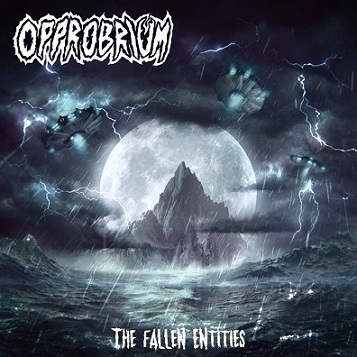 “The Fallen Entities” is the third album delivered by these two brothers under the name of Opprobrium. They were initially known as Incubus, no, not the alt rock band, and changed their name in 2000 to avoid any confusion, although I’m not sure how you would get confused with awesome death metal and radio friendly music for the masses. I wasn’t aware of Incubus, the death metal version just so we’re clear, until just recently, so off I went and had a listen, you know in the name of science and found 2 albums, 1988’s “Serpent Temptation” and 1990’s “Beyond the Unknown” that are also pure and undiluted Death Metal. Anyway, I digress, let’s get into “The Fallen Entities”.

As you can see from the release of their first album in 1988, these guys have been around for a good 30 years now and you can really tell. They are highly accomplished artists that have perfected their version of the death metal dark arts and this album of old school death metal with morsels of thrash thrown in for good measure is done superbly well.
It’s all here, blast beats, beefy chords with good hooks and lashings of lead breaks and snarling vocals, that are a bit in the mould of Sepultura, which keep the neck snapping and legs shaking right through the whole 8 x tracks.

The opening tracks “Dark Days, Dark Times and “Creations that Affect” set the quality for the album with sensational chord and tempo changes with a compelling rhythm coursing just in behind binding the tracks together. Vocals are definitely angry and guttural but the production allows the lyric content to still be distinct and definitive.
Track 5 “Throughout the Centuries” has some amazing chugging riffs and lead breaks which cut through Death to Thrash metal. Drum double kicks and blast beats are also there in spades and all this is penetrated by the growling vocals. This is the longest track on the album at 7 x minutes but at no point did I want to press the forward button.
“Turmoil Under the Sun” bludgeons you with devastatingly heavy riffage, thunderous drumming and more booming vocals which resonate through to the final 2 x brilliant tracks of the album.

This is not an album that you’ll listen to once and put away never to be heard again. This is a cracking example of Death Metal done right by guys that have been in the game and been round the block a few times. (Longstretch)