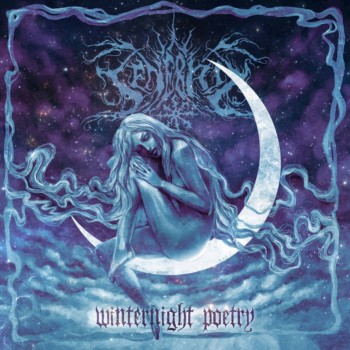 When darkness falls and the temperature drops towards snow and frost level, my choice of music changes as well. When being outside I’m not really someone who will play Anthrax’ “Among the Living” or Suicidal Tendencies’ “How Will I Laugh Tomorrow When I Can’t Even Smile Today” at such a moment, I rather play some icy Black Metal…or the atmospheric kind. Something in between you say? Yeah sure, Burzum’s “Dunkelheit” is perfect as well. In Tenebriz from Russia has the presentation of itself, to give me the idea they could be a next pick during the frosty nights. And I have to say the Russian and Ukrainian scene do have some fine examples.

In Tenebriz is a one man project by an individual called Wolfir and “Winternight Poetry” is the 10th album and if you’re looking for more material he has made a shitload of EPs and splits as well. The core of this album is Atmospheric Black Metal with ambient influences but Wolfir also fused lots of Doom elements in the song writing, which is mostly the mid-tempo approach and the use of a growl besides the moderate Black Metal vocals. It is like a clean version of Burzum “Filosofem” with a touch of Tiamat’s “Wildhoney”, only it is just “ok” as it just don’t score “good” on all elements as it doesn’t give me a feeling of “darkness” or “frost and ice” during the songs. Unfortunately, “Winternight Poetry” does not remain engraved in the memory. (Ricardo)