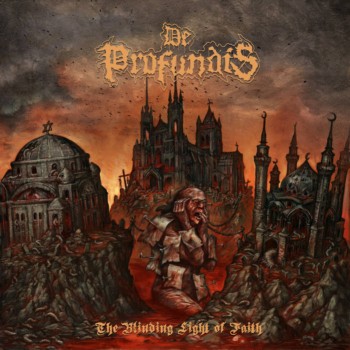 The fifth album from London based progressive death/black metal band De Profundis got the name “The Blinding Light of Faith”. In the past I heard some songs from this band, but I must admit that I haven’t been into their sound since they’ve started off that frequently to give a full history about the band and any changes they made throughout the years…that being said: here’s my opinion about their last creation! They been added the label ‘progressive’, but I tend to call this band a more melodic mixture of Black and Thrash metal. The vocals from Craig Land sounds groovy and understandable, so don’t expect to t hear grunts like other death metal bands as Dying Fetus, Cannibal Corpse, … also the doom-side isn’t audible on this disc. Overall seen the tracks are very uptempo (besides track “Bastard Son of Abraham” where they unload the grip a bit) and the dose of melody can’t be avoid on this album. The most magnificent fact of De Profundis are the riffs they inserted in the eight tracks – listen for example to “Opiate for the Masses” where the riff works like a drug in your head! On a technical level they can still grow in my opinion, but the savage way they used to create these songs is addicting for me. The organic outcome on this release from both guitars and drums, as well as the good production also give this albums the needed underground tone. So if you like melodic Death/Black metal, then this will be your style without contradiction! Enjoy. (Fredde)