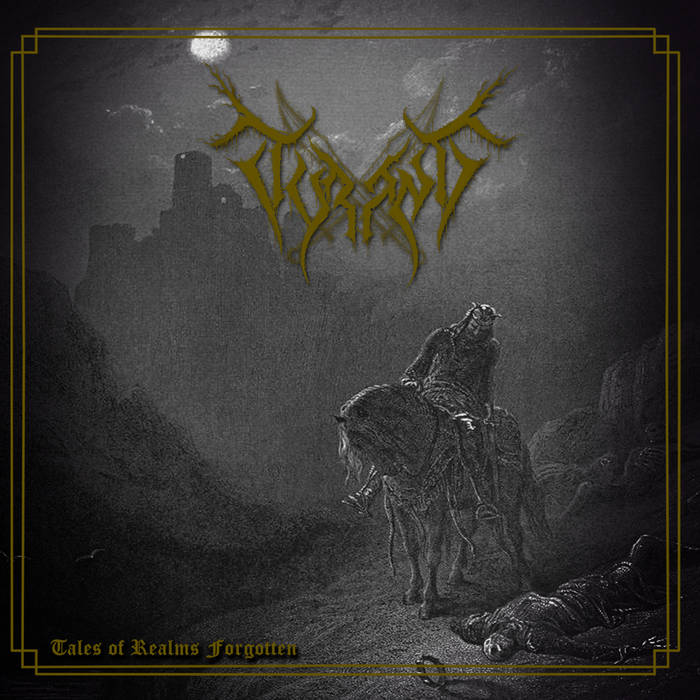 If the enigmatic title for this debut album – ‘Tales of Realms Forgotten’ – doesn’t pique your interest, then the deeply atmospheric and beautifully rendered artwork for the new Tyrant opus most surely will. There won’t be many pieces of album art coming out this year that beats this one.

As mentioned, this is the debut release from UK Black Metal duo Tyrant, save for a single put out last year, – ‘Sworn to the Elements’ – which features on this five track album. Furthermore, it’s been released on CD by Cumbrian label Wulfhere Productions, whose roster is stacked with some of the finest underground UKBM talent.

I’ve had to listen to this album a number of times before I felt ready to commit my thoughts to paper, as it were. Opening with ‘Mists of Necromancy – The Tyrant Rises’, the album begins a winding journey of ancient battles, deathly blood magic and unspeakable nocturnal armies intent on reclaiming the realm for a sinister and merciless Tyrant. In keeping with the lyrical theme the music is a forthright combination of blast-beats, unyielding fast paced riffs and furious searing vocals, laced with the cold steel of some gripping lead guitar work which fuses the core sound with a biting, remorseless melody. To offer up a lazy comparison regarding Tyrant’s sound, take a mid-paced song by Winterfylleth, speed it up, and take away the crisp production to be replaced with a far murkier tone, and you are somewhere in the region of Tyrant. To be sure though there are other influences at work here such as early Darkthrone and Burzum.

Continuing the saga, ‘Sworn to the Elements’ adds to the feeling that this is a concept album, and one worthy of a novel. I’m feeling some Seth Dickinson influence to Tyrant’s work lyrically, with a few dark Tolkienisms and maybe even a dash of Christopher Paolini. Slower elements within ‘Sworn’ add to the sense of trepidation and unease that the album has started to ooze with, which leads bleakly into another aural battering in the form of ‘Desolation’. By now this opus is a maelstrom of aggressive, carnage strewn Black Metal as battles rage both musically and within the tapestry of the story being told. It may be a fantasy novel staple, the subjugated people against an unholy ruler, but in truth some things just never get old.

A rage fuelled onslaught neatly sums up ‘Decree of Death’ whose battering ram approach is belligerent and brutal. ‘Sacred Quietus’ sees things home with a few added technical flourishes from the guitars as well as more outright brutality. tyrant do hit the right tone here though and that end of album feel is present. I love fantasy based Black Metal when done right and tyrant stay clear of the cliched tropes and instead produce a dark, horror filled story of ruin, retribution and tyranny. I shall expect a sequel! (Luke Hayhurst)