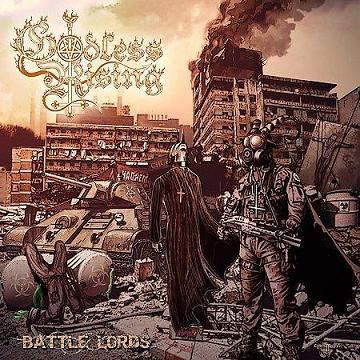 Let’s be clear; “Battle Lords” celebrates the kind of battle which makes liberal use of machine guns, grenades, napalm and big fuck-off tanks, not those sword’n’sorcery type battles waged by trolls and orcs which seem to be all the rage these days. Because America’s Godless Rising aren’t from ‘these days’. Strapped with more weaponry than the armed forces of a small developing nation, these scene veterans are a strike force from the heyday of classic 90s USDM.

Sure, the production is polished up to standards more befitting the twenty-first century, clear enough for the sharp edges of the riffage to gleam, but it still contains enough murky, gutsy depth for an authentic feel. It’s well-balanced to make the most of the crushing, neck-snapping guitar work, from the bubbling, catchy roll of “Sadistic Ritual Carnage” and agile, twitchy runs of “Ancient Grave Lands” to the more blackened urgency of “Beyond the Gates, we Desecrate”. Squealing leads add another dimension to every track- interesting but not technical or self-indulgent. Vocalist Jeff Gruslin is as good as ever, switching between an intelligible, low grunt and the kind of hellish snarl that gives this sort of stuff the right to call itself ‘blackened death’. A few machine gun samples- for example at the start of the incredibly catchy title-track- add to the intense cacophony of blasts and fills emanating from whichever drummer-come-avalanche was doing the duties when this was recorded (for a new band they have one hell of a quick member turnover).

The sweet tempo changes and tendency to snap out of one riff only to settle for another, even more infectious, is reminiscent of Slayer, or Deicide around the time of their debut, and Godless Rising certainly have the evil swagger and air-raid intensity of that band in the days when they were, you know, good. A Morbid Angel vibe pervades, and a comparison with Vital Remains is perhaps inevitable, given that Jeff and contributing guitarist Paul Flynn helped found said band, but again, GR only bring quality souvenirs from the past.

I can hear the choruses of “this stuff isn’t original!” echoing across the internet’s vast ether, and you know what? To hell with it. No, it’s not. At all. But it’s classic, crushing, fairly brutal US death metal, charred grim black and hateful, with very accomplished vocals and artwork by the truly great Chris ‘Thorncross’ Moyen; and when all that adds up, it’s hard to argue with how enjoyable it is. In addition, Godless Rising have only been together since 2005, and this is their sophomore outing- there’s plenty of room to grow. Shut up and bang your damn head for Satan. (EllenS)