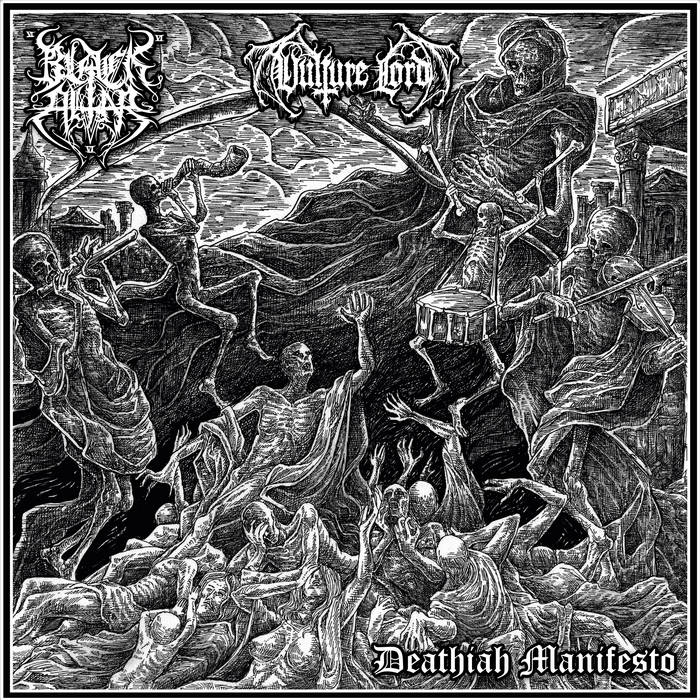 Being rather prolific throughout the bands’ entire quarter of a century spanning career, it is almost impossible not to have come across Black Altar at least once. My first encounter with the band was back in 2004, with their self-titled debut album through Germany’s Christhunt Records, looking back, that album appears to have been the start of a flourishing career. Now, fast forward to 2022, they have returned with a split CD at which they teamed up with Norwegian Vulture Lord. Another such band that has been around for quite some time. Both team up for this split LP, wrapped in tremendous artwork, courtesy of Jenglot Hitam.

After an intro the Polish of Black Altar showcase their Nordic sounding brand of Black Metal. Though not offering anything new, original or something that sounds profoundly mystic, aggressive or provoking, it does sound just like decent Black Metal. While I mentioned the self-titled debut album, it is good to mention the progression the band has made since that album almost twenty years ago. The band does sound much more convincing and it is clear that Shadow (the only original band member left) has grown quite a lot when it comes to song writing. In case you have not heard anything from Black Altar in the past, it would be good to check them out if you are into bands like Tsjuder or Gorgoroth, yet it might sound a bit safer and less gritty these days.

Vulture Lord, on the other side of the LP, sounds quite a bit faster and has much of a thrashy vibe going on. Of course, being from Norway and already having their roots all the way back in 1995, these guys have all the right to swing around that rocking Norwegian Black Metal sound. They definitely fit the same shoes as those of Tsjuder (as well) and Carpathian Forest. It might therefore not come as a surprise that the bandmembers are current and ex-members of bands like Carpathian Forest, Urgehal, Beastcraft and Shining. With such old handed veterans, it might just be only logical that there is more than just a kind nod to the classic Venom records. On ‘Hark! The Hymns Of War’ Sorath Northgrove sounds so much like Cronos that I even had to check if this wasn’t a Venom cover in disguise. A little note is that the three tracks all seem to have come from different recording sessions, they all sound quite different from each other making it all sound quite incoherent and spoils a bit of the natural flow. But using an outro with a sample from the magnificent 1964 Vincent Price staring movie ‘The Mask Of The Red Death’ I do forgive these guys almost anything.

“Can you look around this world and believe in the goodness of a god who rules it? Famine, Pestilence, War, Disease and Death! They rule this world.”