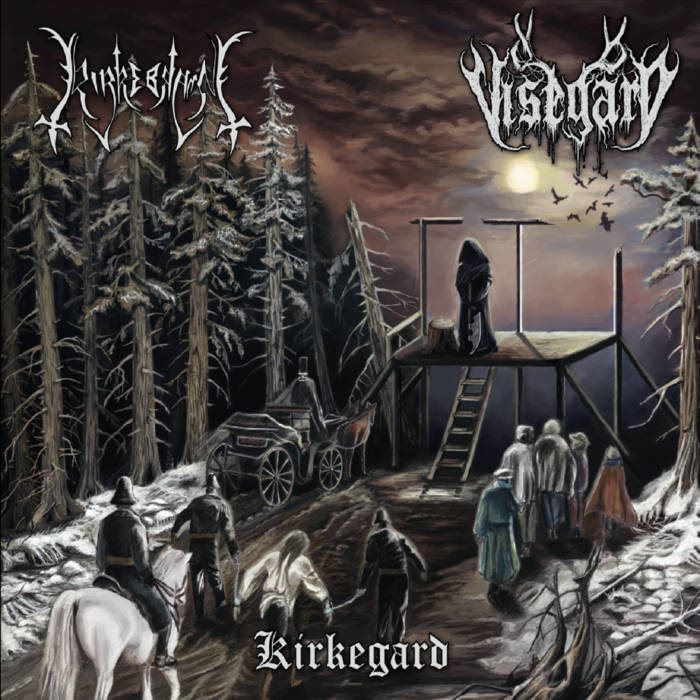 I recently fell head over heels in love with Norwegian Black Metal band Kirkebrann whilst reviewing their 2020 split release with Black Altar. (You can read said review as it was posted just before this one) This time around these crazy lovers of a church burning have teamed up with fellow Norwegian Black Metal band Visegard from Skien in the south of the country for an Odium Records released split CD album of enormous power and brutality.

And its my new favourite clergy botherers Kirkebrann who get the not so originally titled ‘Kirkegard’ underway with ‘Black Metal Blues’, another healthy dose of furious and pummelling Black Metal with an insanely unforgettable intensive melody and it has to be said, a bolder, and more brash sound than on their last split appearance. ‘Døden byr opp til dans’ or ‘Death Invites You to Dance’ is another majestically catchy track of thundering drum tones, guitar melodies of intensively dark groove and when the pace drops, predatory splendour. ‘Vederstyggelig Samsara’ is raw brute force personified; created through the use of blistering work by drummer Thunberg, and maniacally engrossing guitar work by Hrafn and Nasreten, whose skills as both lead and rhythm guitarists are perfectly matched, and who who together weave a thrilling tapestry through all of their tracks whilst performing a saga of epic quality. Equally, Draugs vocals are power and hostile intent personified, whilst the bass playing ferocity of Skroemt adds a ceaseless base of rumbling, throbbing thunder with which the band can feed off. For all of Kirkebrann’s melodic excursions, sometimes they just have to cut loose with towering riffs and bombastic drum tones. one such instance is the crushingly heavy and thoroughly engaging ‘Terroritt’ (Terrorism) whose surging, urgent flow is matched by the icy cold guitar tones and fiercely catchy melody of ‘Lange netter’. (Long nights… which is apt as I could spend all night and the next day listening to Kirkebrann) Sadly for me Kirkebrann’s contribution to this split must end, but if it has to cease then why not do it with a ‘Hedensk dødsmarsj’. (Pagan Death March) Enough said really.

Having glorified and basically licked the arseholes of Kirkebrann, I almost feel sorry for Visegard who have to follow them. This is my first time hearing the band, and they open with ‘Skogsdømt’. (Condemned by the Forest… How does all that fit into one word?) I shouldn’t have worried about Visegard though, who actually have a similar style to early Satyricon but with better production. Visegard create a very intricate and melodic undertone through acoustic guitar and meandering rhythm guitar, whilst over the top of that they feature driven, groove drenched riffs, a catchy as fuck drumming style and a vocal style that reminds me greatly of the excellent Finnish band Paara. Visegard are a band who know how to follow the hardest of acts to follow, that much is clear after only one track! There is an overtly Pagan aura to this bands sound that rises up from the underbelly and weaves itself around everything they create. All of that being said, Visegard are capable of throwing off any atmospheric shackled and ploughing forward with unrepentant abandon, such as during the forth right and punishing ‘Månedans’, (Moon Dance) or the gruelling ‘Fortapelsen’ (The Perdition) whose abrasive vocals match perfectly with the harshness of the riffs. Then there are hybrid tracks such as ‘Draugen’ (The Dragon) which has a mid tempo pace and a grinding flow to it, but then expands into a pleasing, rhythmic, almost folkish piece.

Seriously, this is a spectacular album, a true epic. I can’t believe it took me over a year to find it, but its a firm favourite now! I think Visegard agree with my ramblings on Kirkebrann by the way, as they end their half of the split with a cover of ‘Jerva jakop’ by Kirkebrann themselves. All levity aside though, both bands are equally as impressive!