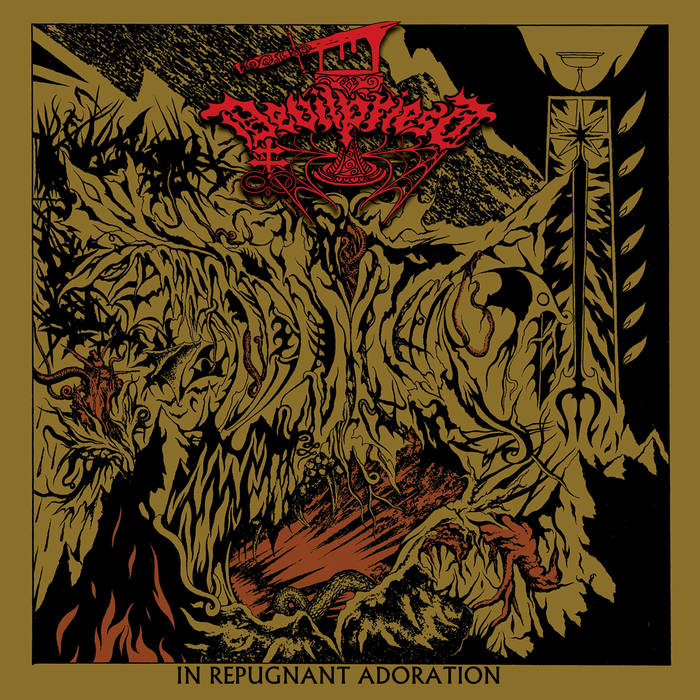 ‘In Repugnant Adoration’ is the sophomoric album of the Polish Black Metal band Devilpriest, a band formed back in 2015 by Tom Hermies (also known for his work in Deus Mortem) and Necro Docre (Anima Damnata, live member for Desecration Temple and ex-Witchmaster). Their ‘Devil Inspired Chants’-album from 2017 was released by the long running Polish Pagan Records label, but although the band changed labels, they kept it within the Polish scene; Odium Records (run by Black Altar main man Shadow) signed the band for this new feat.

Where Tom Hermies goes into some well-thought out sort of Black Metal territories with Deus Mortem and Necro Docre has a chaotic sort of Death/Black Metal hybrid with Anima Damnata, the duo will have wanted something completely different with Devilpriest. While Devilpriest has a slight Death Metal edge to its guitar tone too, it definitely is a different kind of beast. With Devilpriest they clearly opted for the all-guns-blazing kind of Black Metal, predominantly blast beat driven and a tad one-dimensional. It is done in the right Marduk initiated fashion, with only a few guitar leads here and there, this is basically a tasty speedfest from A to Z. But, where a fair share of the bands in this particular Black Metal tradition tend to get a bit all to fanatical in their frenzy, Devilpriest manages with apparent ease to bring just enough dynamics to rise above the average level. ‘In Repugnant Adoration’ is by no means a revolutionary record and should not be listened to as such either, in fact, this seems an honest and well-executed homage to that late 90’s blasting style of Black Metal and if that is something that you like, then you certainly should consider this album to sink your teeth into.