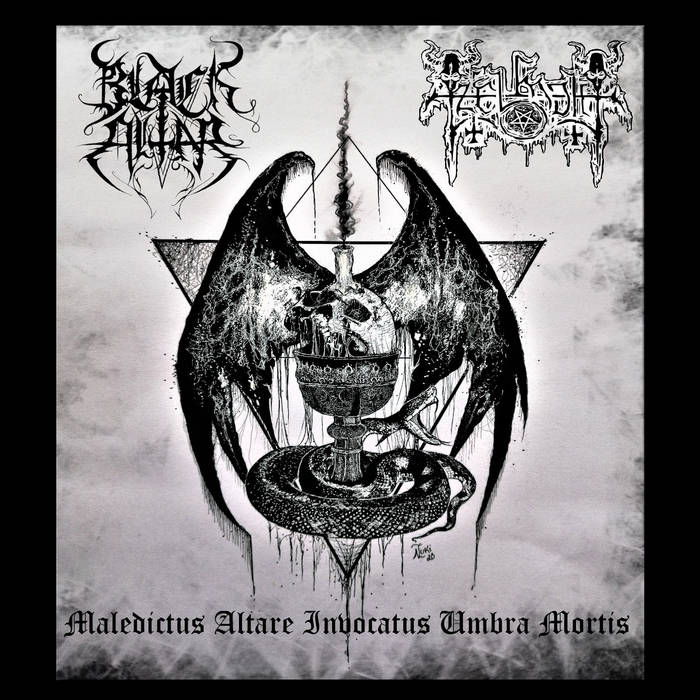 Both bands on this split 7” EP, the Polish Black Altar and the Colombians of Tzelmoth, have a long history of sharing a release with other bands, which makes this collaboration quite a logical one.

Unfortunately, Black Altar do not contribute a new song to this split EP. ‘Winds Ov Decay’ was previously released in 2017 on their split LP with Beastcraft, but it is quite a decent track that shows Black Altar in a more standard way, not too bombastic (like on the Kirkebrann split) or too gritty like their older stuff. To be frank, I am not really sure why this particular song was picked, as Black Altar have released a lot of more interesting songs over the past 25 plus years of their existence. But on the other hand, it is nothing bad or a completely wrong choice. At least the electronically remixed song from the Beastcraft split wasn’t picked out.

Although Tzelmoth has already been around since 1999 and has been quite active over these past two decades, none of their previous releases ever reached me. While preparing this review I have listened to a couple of their older tracks to get some kind of idea of what the band is all about – yet, I haven’t checked out all of their 17 (!) previous releases. But although I can’t say that Tzelmoth is all that ground breaking or anything, but this new song was quite a nice first introduction. Musically, it seems a bit all over the place with adding a lot of different musical ideas. Going from quite creepy Black Metal to furious Thrashy passages and making use of raspy and high pitched Black Metal screams and also deep Death Metal grunts. It is actually a bit of everything, which also makes it sound a little incoherent.

This split 7” EP is released by Masters Of Kaos Productions and is a part of the ‘Black Masses Collection’ of split 7” EP’s and is already digitally available. Due to the dramatic turn around times at all pressing plants worldwide the physical vinyl EP’s are expected to get in early next year.