The Projectionist – Visits from the NightHag part 1 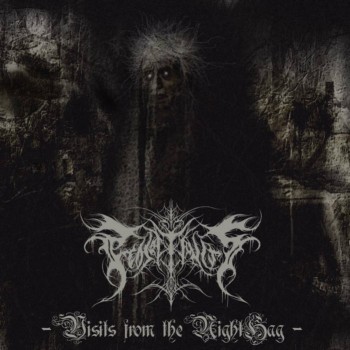 While nightmares and night terrors are two very different things, most of us have experienced them to some extent. Usually they seem to be the reflection of whatever our brain had to deal with during the day, and since our brains can be far more complex than what we understand about them, sometimes nightmares and night terrors might seem like a complete and utter nonsense when we try to explain them to someone else.

Meet The Projectionist, the band who build their own complex story based on the protagonist George’s encounters with (as the titles suggest) the NightHag. The band is lead by Lörd Matzigkeitus, who is apparently trying to out-do himself this year, as he already released an album with his other band, The Black Sorcery in March, and an album with a project bearing his own name in April. When it comes to a wide range of vocals, he is joined by Caesar Tiberius (of the Dead Jesus fame) and Aven Haunts (who provided the horryfing sounds of the NightHag). The tortured and manic vocals emphasize  a mixture of epic and atmospheric Black Metal provided by Parageist (guitars; also of Path to Extinction fame), Orpheus (bass; also of The Black Sorcery and Lörd Matzigkeitus) and Malphas (drums), who are occasionally joined by Clytemenestra on the piano.

The story of George unfolds before us, describing how being caught between reality and realm of night terrors (or the NightHag) look and most of all, sound like. Like a perfectly done movie soundtrack, music and atmosphere are balanced enough to describe the story on its own, yet the vocals are the ones who explain the story through all possible human and otherworldly sounds human (and not so human) throaths are capable of making. You don’t really need pictures to know what’s going on as this drills into your brain and unfolds there, leaving you just enough room to feel like you’re actually a part of this story. (Black Mary)